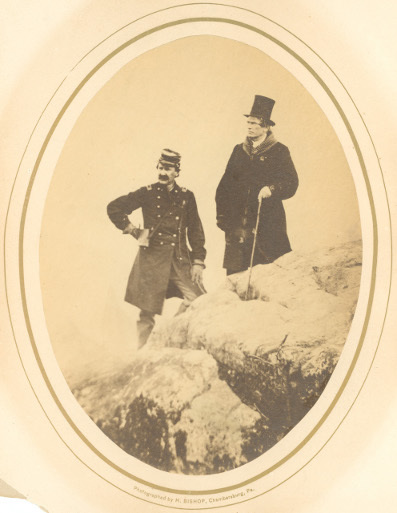 Drew Trustee Matthew Simpson was born June 20, 1811 in Cadiz, Ohio. As an infant he was baptized by Methodist Bishop Francis Asbury (the personage on the horse statue in front of Mead Hall).  Simpson attended Allegheny College and was later ordained an elder in the Methodist Episcopal Church. He became a Bishop in 1852. During the Civil War Simpson worked in the Washington, D.C. area. In that appointment he interacted regularly with U.S. Government officials. He was well acquainted with Secretary of War Edwin M. Stanton (also a Methodist) and was considered a confidant to President Abraham Lincoln. In 1865, Simpson preached the burial sermon at Lincoln’s funeral in Springfield, Illinois. Simpson served on the Drew Board of Trustees from 1868 to 1885. He was President of the Board from 1877 to 1880. 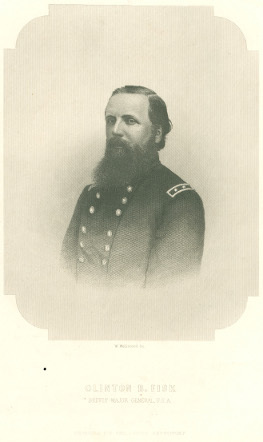 Clinton B. Fisk was born December 8, 1828 in York, New York. Fisk attended Hillsdale College and Albion Seminary in Michigan and worked as a banker and insurance agent. He later moved to St. Louis, Missouri and during the Civil War served as a Brigadier General for the 33rd Missouri Infantry of the Union Army. He fought in several skirmishes including the Battle of Nashville. Following the war Fisk represented the United States Freedman’s Bureau and was a founder of Fisk University. He served on the Drew Board of Trustees from 1876 to 1891. His letter to his close friend Bishop Matthew Simpson is displayed in this case. In the correspondence Fisk asks Simpson to speak with President Lincoln concerning a rank promotion from Colonel to General.

John T. Martin was born October 2, 1816 in Baltimore, Maryland. Martin attended St. Mary’s College and served as minister to Methodist parishes in St. Louis, Missouri and Brooklyn, New York. He established the Martin Institute in Frankfort-on-the-Main, Germany for the purpose of educating German Methodist ministers. During the Civil War he lent the U.S. Government over $8 million dollars and as a business owner supplied the Union Army with $50 million worth of clothing and flannels. He served on the Drew Board of Trustees from 1876 to 1877.

Theodore Runyon was born October 29, 1822 in Somerville, New Jersey. He graduated from Yale University and starting in 1846 practiced law in Newark.  He served in the Civil War as a Brigadier General for the 1st New Jersey Brigade and fought in the battles of Second Bull Run and Gettysburg. He was elected Mayor of Newark (1863-1865) and was President of the Manufacturers’ National Bank of Newark (1871-1873). He later served as U.S. Ambassador to Germany (1893-1896). He was a member of St. Paul’s Methodist Episcopal Church in Newark and served on the Drew Board of Trustees (1868-1872).

John McClintock was born October 27, 1814 in Philadelphia, Pennsylvania. He graduated from the University of Pennsylvania and served on the faculty of Dickinson College. He was a vociferous abolitionist and helped incite a riot in Pennsylvania that helped free several fugitive slaves. During the Civil War McClintock was minister at the American Chapel in Paris, France. He was an outspoken advocate for Unionist causes and wrote articles for the London Times and gave speeches in Exeter Hall. His home in Paris functioned as a gathering space for Americans who were pro-Union in France. As a key figure in the Central Committee of the 1866 Centenary and was highly influential in helping convince Daniel Drew to fund the start of Drew Theological Seminary. He was appointed Drew’s first President in 1867. He also worked as professor of Practical Theology for the Seminary until his death in 1870.

Homer Baxter Sprague was born October 19, 1829 in Sutton, Massachusetts. He graduated from Yale University, Yale Law School and New York University (Ph.D). He worked as a lawyer and school principal until the Civil War. Sprague raised two companies of soldiers for the Union Army and was appointed a Lieutenant Colonel for the 13th Connecticut Infantry. He fought in several battles including Port Hudson and Cedar Creek. He and several others were captured at the Battle of Winchester and he was wounded at Irish Bend, Louisiana. Following the conflict Sprague was appointed as faculty to Cornell University and later became President of the University of North Dakota. From 1896-1899 Sprague was Instructor of Elocution at Drew Theological Seminary. He authored several books including Fellowship of Slaveholders (1857), American Liberty (1900), Right and Wrong in Our Civil War (1903) and Lights and Shadows in Confederate Prisons (1915). Sprague died March 23, 1918.