Promotional tactics are needed to effectively wage war. Speeches, writings, pamphlets, and broadsides help shape conflicts around particular ideologies. Those ideologies need the support and financial contributions of non-combatants. During the Civil War, government, state and local leaders argued for and against the conflict. American Methodists were no exception. Methodist ministers and editors waged war using rhetoric from the pulpit and the press.

Thousands of spoken and published sermons identified of the place of America, the duty of patriotic citizens, and the ways in which Methodist ministers and laity might participate in the conflict. Editors of American periodicals and newspapers used the press to shape the perceptions of war for readers. Several Methodist publications informed readers of the toll of the war on children and called for women as active participants in the promotion and product-building of the war machines, North and South. Articles from the Christian Advocate and Journal, Ladies' Repository, and Methodist Quarterly Review are found here. 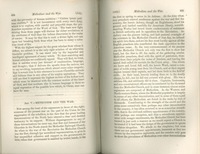 ← Ministry During the Civil War
Methodist Newspapers Report on the War →
Nationalism, Propaganda, and Methodist Tools of War