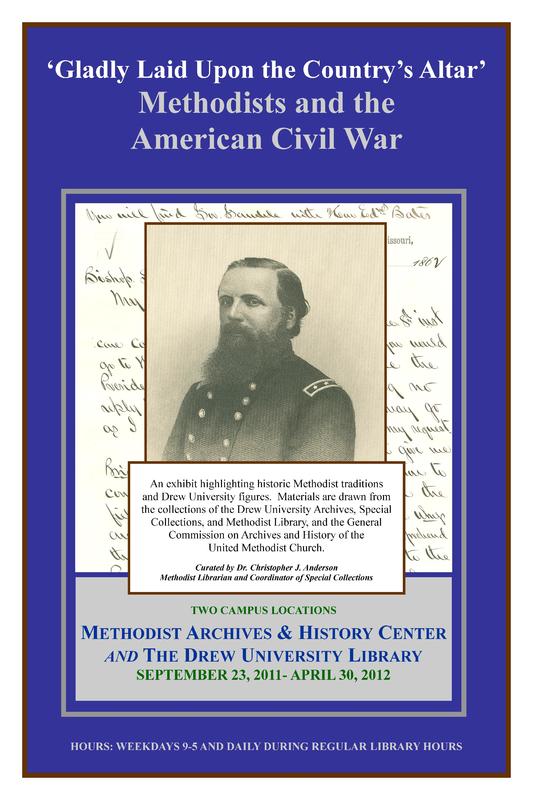 On March 4, 1865, President Abraham Lincoln in his Second Inaugural Address confirmed that American citizens and armies both North and South believed that God was on their side of a national conflict that has been called among other names the Civil War, the War Between the States and the War of Northern Aggression. From 1861 to 1865 several hundred thousand Methodists from the United States and the Confederate States of America preached, fought, and labored for both sides. During the conflict Methodists served as government officials, soldiers, chaplains, nurses, and church leaders while fighting for states’ rights and against the institution of slavery. With adherents in the millions, American Methodists played a crucial role in the struggle for racial and sectional freedoms.

Drew University, founded shortly after the conflict, had several direct connections to the Civil War. Drew landowners, trustees, administration, faculty and students participated in the conflict. Those links are highlighted and the exhibit also showcases the historic tensions within American Methodism over racial identities that led to denominational fracturing and ultimately to sectional conflict. The exhibition highlights ten historic Methodist traditions and includes manuscripts, photographs, printed texts and material objects from the collections of the Drew University Archives, Special Collections and Methodist Library. Additional items on display include materials from the General Commission on Archives and History for The United Methodist Church.