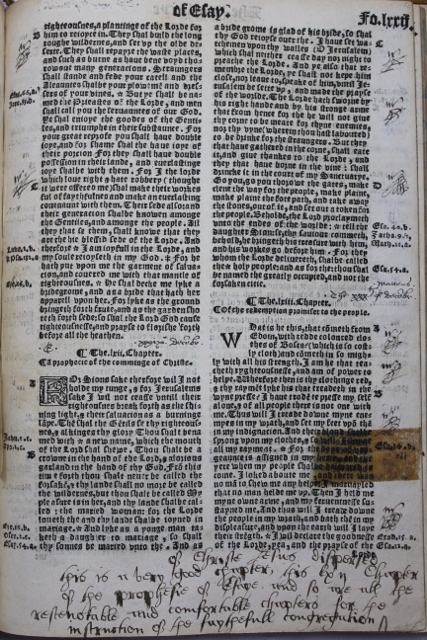 "Of Christe Jesus dispersed this is a very good chapter, this lxii chapter of the prophesis of Esaye, and so are all the reste notable and comfortable chapters for the instruction of the faythefull congregation."

The 1550 edition of the Great Bible is attributed to Thomas Cranmer (1489-1556) Archbishop of Canterbury during the reigns of Henry VIII, Edward VI, and Mary I.  A leader of the English Reformation, Cranmer facilitated an English translation of the Bible, authorized sermons, as well as the Book of Common Prayer. This authorized translation was to be kept in every church to foster uniformity in and devotion to the revised religious practices and theologies. In Drew’s partial copy, one can see the comments of a sixteenth-century reader on the bottom of this page:

"Of Christe Jesus dispersed this is a very good chapter, this lxii chapter of the prophesis of Esaye, and so are all the reste notable and comfortable chapters for the instruction of the faythefull congregation."

The pious definition of the word "comfortable" was used to comic effect in Twelfth Night, Act I, sc. v, in a scene filled with references to reading a prayer book. When Viola addresses Olivia with the Marian title, “Most sweet Lady,” Olivia retorts, “A comfortable doctrine, and much may be said of it. Where lies your text?” 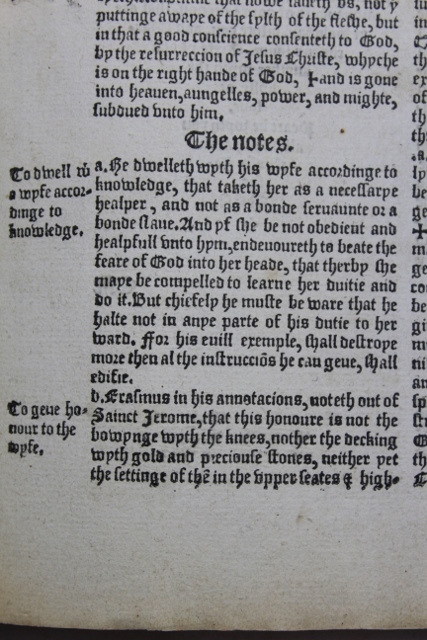 “And if she be not obedient and healpeful unto him, endevoureth to beat the fear of God into her head, that thereby she may be compelled to learn her duty and do it.”

This printing of the Bible is also known as the “Wife Beater’s Bible”, for an editor’s note at 1 Peter 3:7,“And if she be not obedient and healpeful unto him, endevoureth to beat the fear of God into her head, that thereby she may be compelled to learn her duty and do it.” Homilies required to be preached on marriage often referenced this same passage and reflected this sentiment. Prior to and throughout the Reformation, translations like this made the Bible and biblical commentary available to those who could not read Latin or Greek. The commentary in this bible displays the cultural mood of 16th-century London regarding the relationship between husband and wife. Likewise, in Taming of the Shrew, we see the violent extremes a man was permitted in order to keep his wife obedient. Although Petruchio does not use physical force to tame Katherina, he instills fear and obedience in her by taking away her liberties. A year after the original printing of this Bible, the Royal Injunctions of 1538 required that all churches purchase “one book of the whole Bible of the largest volume, in English.” Decades later in Shakespeare’s time, church attendance was mandatory and Shakespeare may well have seen or heard this commentary first Peter. 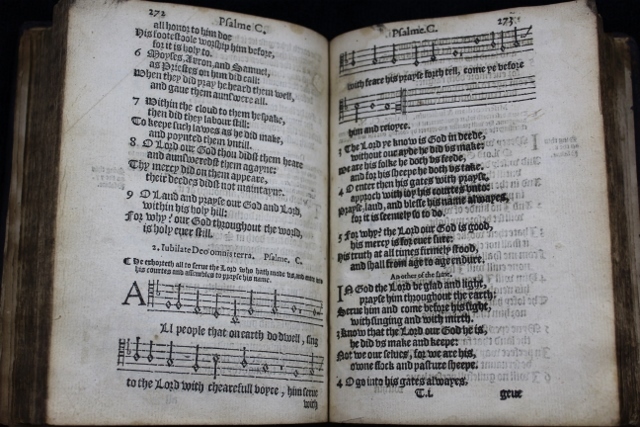 The Whole Book of Psalmes

This collection of the psalms contains the text set to music, as well as other common hymns and prayers to be used in church services. It was printed "by the privilege of her royal majesty,” that is, it was the official state version forbidden for anyone else to print. Shakespeare undoubtedly knew the psalms as church attendance, where they were sung regularly, was mandatory. He regularly made both direct and general allusions to religious texts, including the psalms.  In The Merry Wives of Windsor, for example, he refers directly to Psalm 100. Mistress Ford reads the deceitful Falstaff’s letter to her and says that his sweet but disingenuous words felt as if he had set the hundredth psalm “to the tune of ‘Greensleeves’” - a distinctly unreligious song of the time (Merry Wives II:I:60). The original tune of the hundredth psalm was famous and, though many of the psalms and tunes changed through the different reigns, the hundredth psalm stayed about the same. Using such an integral and recognizable piece of religious text to describe Falstaff’s immorality would have been striking to his audience.