Blood Libel and the Nuremberg Chronicle 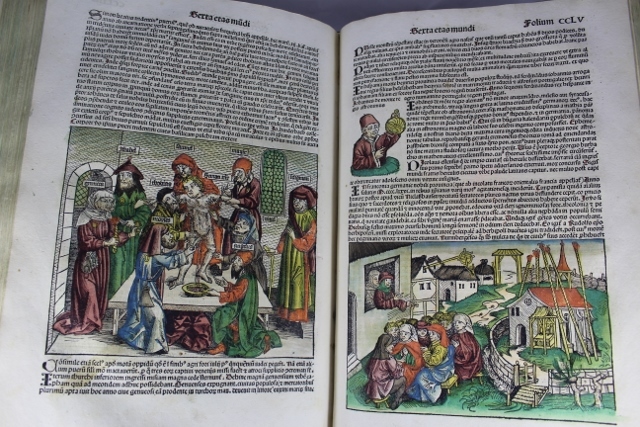 Hartmann Schedel’s Nuremberg Chronicle or Liber chronicarum is a world history from Genesis to the Last Judgement that fuses secular and religious narratives from a wide variety of sources. The pages are adorned with detailed woodcuts which are hand painted in this copy; the woodcuts include biblical and historical images as well as maps and city views. This copy is printed in Latin; it was also published in German at the same time. The texts integrate Christianity and Italian humanism. The sixth age in Schedel’s chronicle includes attacks on and false allegations against Jews, including the ritual murders of a Christian boy. The false accusations of blood-libel, the murder of Christian children for rituals using their blood, were myths that first appear around the 12th century. In 1475, there was a blood-libel trial in Trent after the body of a Christian boy, Simon, was discovered, and Jews were accused of the ritual murder and crucifixion of Simon. Additionally, the Nuremberg Chronicle depicts the accusation of the crucifixion by Jews of an English child, William of Norwich (Schedel, 201v). Shakespeare’s play, The Merchant of Venice, teems with anti-Jewish ideas and blood-libel charges; likewise, the woodcuts in the Nuremberg Chronicle presents “evidence” for the baseless charges for blood-libel (Schedel, 239v). The myth of blood-libel and the story of the murder of Simon of Trent was popularized by the widespread publication of the Nuremberg Chronicle and may have influenced Shakespeare or his audience. Sadly, the passage from The Merchant of Venice plays on Christian fears of the alleged Jewish desire for Christian blood. 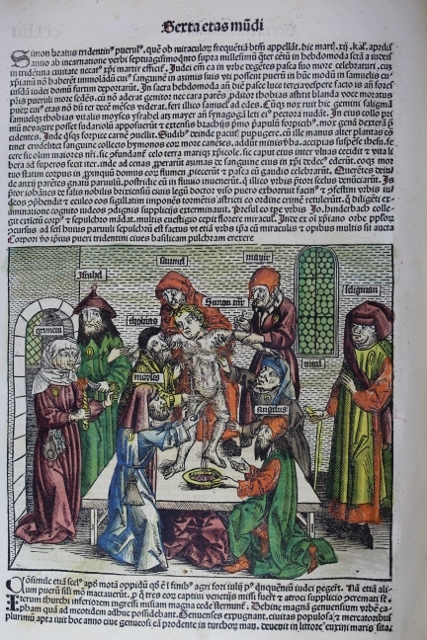 The anti-Jewish themes in the Nuremberg Chronicle provide insight into the cultural context surrounding Shakespeare's The Merchant of Venice. In that play, we see Shakespeare's depiction of the Jew, Shylock, conforms to and contrasts with the prevailing attitudes toward Jews in Early Modern Europe. While Shylock can be seen in some ways to confirm the widespread Christian suspicions of Jews, including blood libels, he also poignantly articulates the widespread persecution of the Jews. In his line, “sufferance is the badge of all our tribe” (1.3.437), for example, recalls the Fourth Lateran Council (1215) canon “that Jews wear distinctive signs specifically identifying them as Jews.” An example of this practice can be seen in the yellow badges worn by the Jewish people depicted in the woodcut displayed.