Included in the exhibit are three editions of the Book of Common Prayer [BCP] from 1549, 1596, and 1615, each of which details the rites and prayers of the church service of that time, but each of which has differences that, altogether, tell the story of the English Reformation. Coinciding with the publishing of the first Book of Common Prayer, Parliament passed their first Act of Uniformity to order all parishes to use the book for their services. As the Reformation changed, so did the content of the BCP, becoming less and less like England’s Catholic roots and more radical in its reforms. Elizabeth I’s Act of Uniformity was the first to require everyone to attend church services or else pay a fine. This means that Shakespeare was undoubtedly familiar with the Book of Common Prayer, as it was used during every church service and Shakespeare was most likely taught from it during his early days in school. Because of this deep connection as well as the 15 ever-changing nature of the Church at that time, each of these three books serves to demonstrate pieces of the connection between Shakespeare’s work and the significance of the BCP to create a better understanding of how this religious text influenced him. 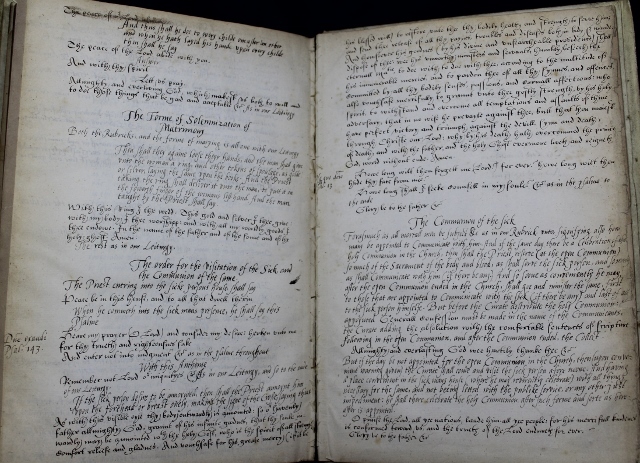 The 1549 BCP was the first of its kind to be published. It precisely described the proceedings of each rite and sacrament, including marriage. In our 1549 copy, the marriage rite is incomplete, partially written in on blank pages in the back. The entirety of the marriage rite is far more complex. Consent, consummation and the marriage rite as detailed in the BCP were the necessary steps to forming a legal marriage in Shakespeare’s time. Many of Shakespeare’s plays complicate the circumstances around this rite in order to create dramatic tension. Romeo and Juliet is the best known example of this trope. During the marriage rite, the minister would ask “Who geveth this woman to be maried to this man?”. The woman’s father or friend must consent in giving her away in order for the marriage rite to be valid. The family or attendees of the wedding must also consent to the union by not speaking up when asked about “any juste cause why [the couple] maie not lawfully be joyned so together.” In Romeo and Juliet, the feuding between families make it impossible for the couple to easily get the needed consent from family and friends, leading to the secretive rite and consummation and ultimately fatal steps taken by the pair to try to forge a marriage. 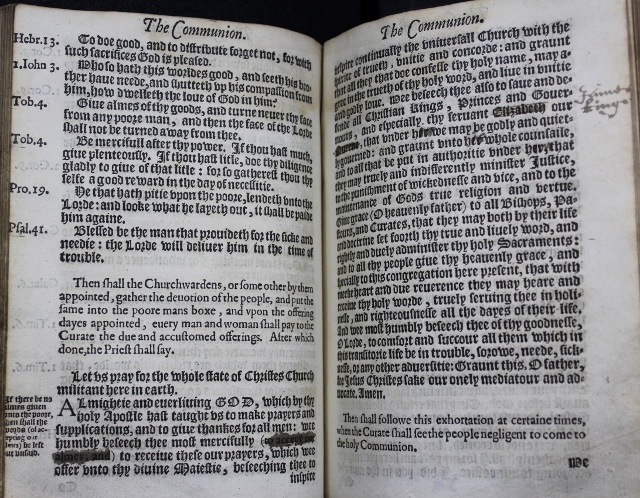 In this copy of the 1596 BCP the owner crossed out most of the references to Elizabeth I and wrote in references to James. On this page specifically “Elizabeth” and “Queene” are crossed out and written in as “James” and “Kinge” while “her” is changed to “him” and “his” multiple times. The owner also crossed out “to accept our almes,” which could signify resentment towards Catholic notions of “works.” These handwritten notes reveal an engaged reader changing the wording of prayers that they used regularly to be in alignment with the changing world and their own views.

One of the defining differences that the Reformation brought about concerned the Communion rite. Catholics believed that during Communion the bread and wine served took on the essence of the body and blood of Christ while maintaining its physical form. During the English Reformation, though, Communion was viewed as a reminder of the sacrifice Jesus made instead of an actual change in matter. Shakespeare’s works often referenced religious and social trends like these. Hamlet says “with the hobby-horse, whose epitaph is ‘For O, for O, the hobby-horse is forgot” (3.2.128-129) while commenting on his father’s death. A “hobby-horse,” in that time, had many different meanings, between a quasi-religious figure who was half horse and half man, a name for a promiscuous woman or fool, and a costume used in public dances. It is hard to say which definition Shakespeare was referring to, but it is clear that during that time, the hobby-horse stood for something once constant in society that had its turn and is now just a nostalgic memory, like Hamlet’s father. The forgotten dual nature of the hobby-horse is reminiscent of 18 transubstantiation of the Eucharist that is forgotten in the Book of Common Prayer and, therefore, in society. 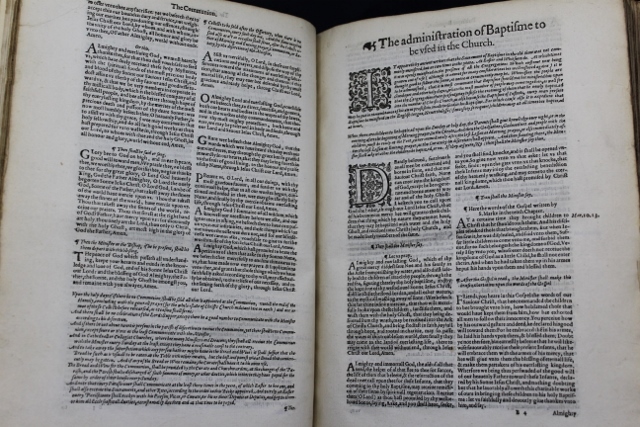 At the end of the Communion rite, as shown in the 1615 BCP, it is explained that any wheat bread can be used as long as it is the best that can conveniently be found and that any extra bread or wine should be used by the priest’s wife in her regular cooking. This instruction was added to the BCP to “take away the superstition” of Communion that was connected to the former belief of transubstantiation, as discussed with the 1596 BCP above. This fear of superstition is played out within many of Shakespeare’s works, most notably in Macbeth. People, in Shakespeare’s time, used the word “superstitious” as a criticism of beliefs outside of their own, most commonly in reference to the Roman Catholic doctrine. Shakespeare uses Macbeth’s downfall as a warning against superstition. The witches use potions and carefully crafted spells that could be compared to how the reformed Church of England and its supporters viewed the Catholic belief in transubstantiation and their thought that the Catholic sacraments were too ostentatious to truly be pious.