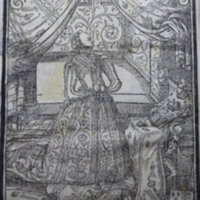 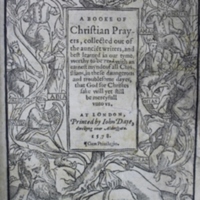 A Booke of Christian Prayers was printed under the order of Queen Elizabeth and is filled with daily devotional readings. The book is also commonly referred to as “Elizabeth’s prayer book,” with a large image of her on the second page. The book was printed in a limited quantity for the use of Queen Elizabeth and this copy is part of the first published edition, which is very rare. The prayers in the book range from those to read when one wakes up, to prayers for neighbors, queen, church, and magistrates, and other prayers for God’s grace and repentance from sin. Prayers are integrated in the daily lives of people from waking to putting on clothes. Prayer is simultaneously an intimate form of worship and Queen Elizabeth is determining what to be said and the proper way to pray. She is the example and role model of religion and proper worship. Queen Elizabeth’s authority is clearly pronounced.  One of the prayers is “a prayer for the obtaining of a sound minde.” The prayer reveals the religious context of the play, Hamlet, where there is a question of the sanity of Hamlet, but also the questionable death of Ophelia. In Act 5 scene 1, there is a conversation between two clowns about the grave of Ophelia and of her Christian burial. Later in the scene Laertes asks the priest if more could be done, but nothing else can be done. Sanity and suicide were religious concerns and prayers were provided for their healing and comfort but they also raised questions as to the rights of the dead and the status of their salvation. 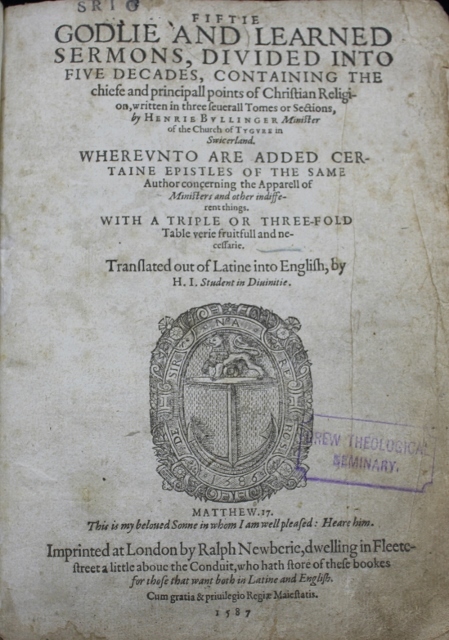 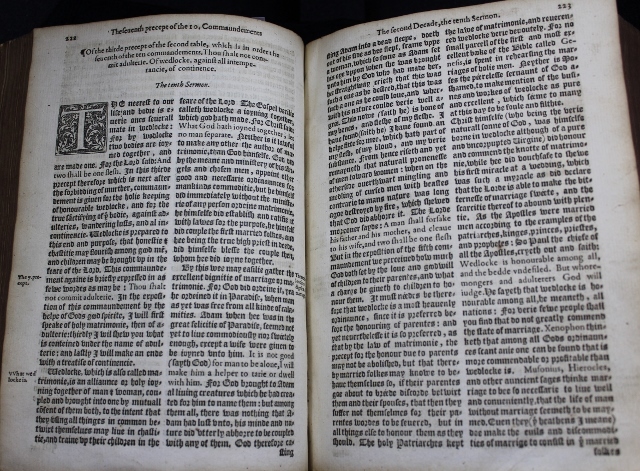 This collection of sermons written and preached by Bullinger himself, spans five decades, and explores the principles of Christianity, including the law, free will, and, perhaps most importantly, understanding the grace of God. Shakespeare writes in Act III of Hamlet the character of Claudius taking part in the Catholic view of a perpetual cycle of sinning, asking God for forgiveness, being absolved of one’s sins and repeatedly continuing to sin anyway, known as the penitential cycle. As Claudius prays for absolution of his sins of murder and incest against his brother, the late King Hamlet, young Hamlet looks on and declares, “Now might I do it pat, now he is praying; And now I'll do't. And so he goes to heaven; And so am I revenged”(Shakespeare and Evans III.iii). By making the villain of this tragedy an un/repentant Catholic, Shakespeare paints the picture of Catholics as tyrants and traitors. In doing this, he echoes works such as Sermons, in which Bullinger reports the “servile dread of punishment”(Bullinger 565) as a motivator to repent among sinners, depicting the Catholic Claudius in an even more unfavorable, cowardly light. Claudius’ repentance comes from a fear of punishment rather than a love of God and a true forgiveness from the heart as a religious man.

This collection gave the priests new sermons to read to their church and explains the expectations for Christianity in detail, including the marriage rite, communion, baptism, and more. The Fiftie Godlie and Learned Sermons are similar to sermons that would have been given at the Church of the Holy Trinity in Stratford after Elizabeth I became queen. The religious ideals about marriage, baptism, and death were all influential in Shakespeare’s plays. For example, in a sermon on the commandment against adultery, Bullinger describes what marriage should be like for Christians and that husband and wife should be “joined together” and “of one flesh,” (222) referring in part to the consummation of a marriage, which was required for a marriage to be considered legal. In Hamlet, Shakespeare 21 puns on this when Hamlet responds sarcastically to Claudius who claims he is Hamlet’s father and loves him. Hamlet insults Claudius, saying “[You are] My mother. Father and mother is man and wife, man and wife is one flesh, and so, my mother.” Punning on the marriage rite, he is simultaneously lowering Claudius’ status, labeling him as a woman, and also pointing to his mother as a traitor. 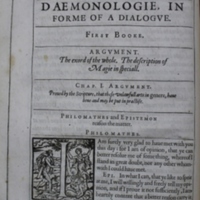 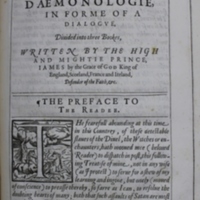 This book is a 1616 compilation of the works of King James I of England (i.e., James VI of Scotland). The book was printed in London just north of Saint Paul’s Cathedral. The collection includes James’ Dameonologie. It promoted witch hunting and detailed the evidence to identify witches and witchcraft. This was important to the reformers and royal authority as it provided a means to prosecute those who were seen as threatening to their authority. In the early modern period, women were most likely to be accused of illicit magic. This can be seen in several works by Shakespeare, most notably Macbeth, which includes witches and sorcery and draws on James’ own experiences in Scotland. While witches prophesy throughout the play, Lady Macbeth is more sinister; urging Macbeth to act, she pushes him to kill King Duncan and fulfill his ambitions. In Act I scene V, she calls upon spirits to “unsex me here,” essentially performing a satanic ritual. For her to be powerful she needs to be stripped of her gender. Women of power in society posed greater threats to Christendom than those on the margins. It is women who are perceived to be seeking power, defying the masculine sphere of influence, that are characterized as witches. Women of power, like Lady Macbeth, were seen as a threat and potential witches in this society. 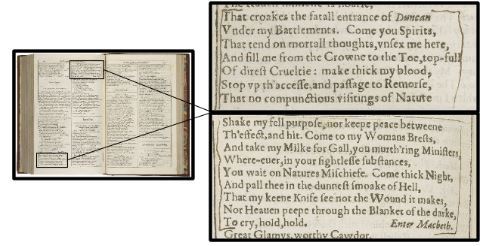