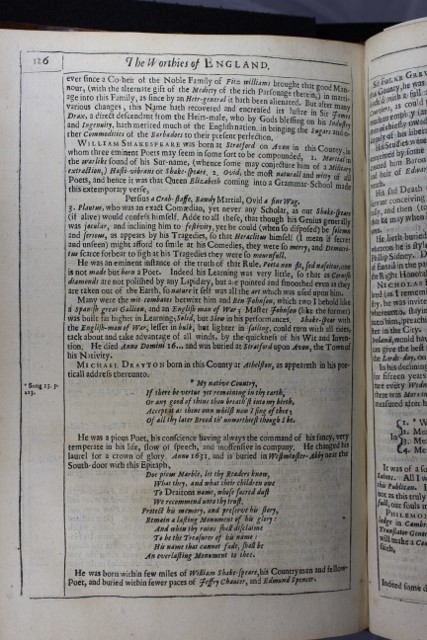 The History of the Worthies of England

Thomas Fuller’s The History of the Worthies of England serves as a gazetteer to England and includes the first biography of William Shakespeare. The guide is organized by counties and details physical descriptions and biographies of people residing within each county including saints, martyrs, prelates, statesmen, and writers. The book was published posthumously and sections are missing information. The History of the Worthies of England is significant in the context of the Reformation as a historical guide to England, and Fuller himself wrote that “[n]o word occurs oftner in this our Book than REFORMATION: It is as it were the Equator, or that remarkable Line, dividing betwixt Eminent Prelates, Lea[rn]ed Writers, and Benefactors to the Publick, who lived Before or After it” (Fuller, Volume 1 39). The History of the Worthies of England contains the first known written biography of Shakespeare under the county section of Warwickshire; however, Fuller was evidently ignorant of Shakespeare’s birth and death dates. He writes that “three eminent Poets [Martial, Ovid, and Plautus] may seem in some sort to be compounded” in Shakespeare, and he additionally injects that similar to Shakespeare, Plautus “was an exact Comedian, yet never any Scholar” (Fuller, Volume 3 126). Fuller compares playwright Ben Jonson as a “Spanish great Gallion” and Shakespeare as an “Englishman of War” suggesting both a sense of the nimbleness of Shakespeare’s phrasing and a particular national pride (Fuller, Volume 3 126). 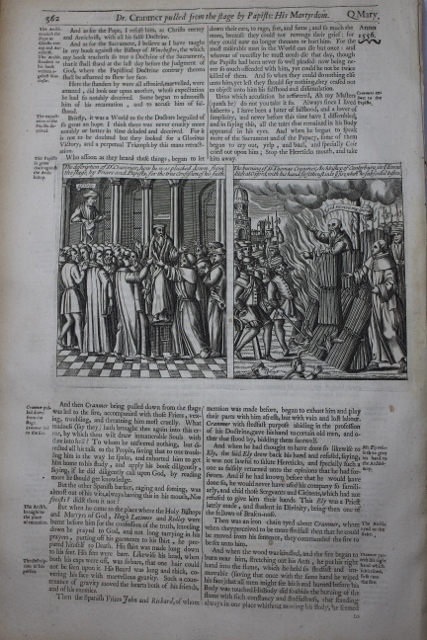 John Foxe’s Acts and Monuments, known as The Book of Martyrs, is a collection of dramatic narratives of Protestant martyrdom supplemented with extensive woodcut depictions. Foxe wrote a large part of the work while in exile during the reign of Queen Mary Tudor, and much of the subject of the volumes focuses on Mary’s persecution of Protestants, perpetuating the notion of her as “bloody”. The work is significant to the Reformation not only as a history of the Church of England but an account of persecution and martyrdom that largely influenced anti-Catholic narratives for centuries. In 1571, Acts and Monuments was ordered to be placed in Cathedrals alongside the Bible and copies were to be accessible in parish churches, allowing the narratives to spread. Foxe celebrates martyrs including Sir John Oldcastle and Thomas Cranmer who are also represented in Shakespeare’s plays, Henry IV and Henry VIII respectively. Oldcastle appears in Henry IV;however, his name was altered to Falstaff before the printing of the 1598 Henry IV, Part 1 quarto. This substitution is recorded in Thomas Fuller’s entry in The History of the Worthies of England; Fuller writes “[n]ow as I am glad that Sir John Oldcastle is put out, so I am sorry that Sir John Fastolfe is put in” (Fuller, Volume 2, 253). In writing Act V of Henry VIII, Shakespeare likely consulted Foxe’s description on Cranmer, to which our copy of Acts and Monuments is opened, due to the close parallels between the dialogue of Cranmer and King Henry VIII in Shakespeare’s play and Foxe’s narrative.