Edward Elton’s The Triumph of a True Christian Described was published in London’s Black Friar’s precinct in 1623 by Richard Field, Shakespeare’s childhood friend from Stratford who became a printer in London. This post-Reformation era book analyzes the concepts of predestination, grace, and free will. Elton was a Puritan, so his beliefs had roots in the ideas of John Calvin. Calvin’s beliefs on predestination included his concept about the inner and outer writings of the soul; the inner being God’s mark (and therefore destiny) on each individual (Taylor, 265). In Hamlet 3.2.202-204 the Player King discusses the conflict between will and fate in a manner that parallels the conflict between the inner and outer “writings of the soul” as described by Calvin and in The Triumph of a True Christian. The relevance of Elton’s work is that because it was printed by Field, there is a high probability that Shakespeare read his work in Field’s shop (Greenblatt, 394). This would have been an interesting read for Shakespeare, because the debate on predestination, grace, and free will were prevalent during this time (as exemplified on page 689 seen in this display).

Martin Luther’s Commentarie was published in London’s Blackfriars precinct in 1616 by Richard Field—a childhood friend of Shakespeare’s, who later became a printer in London. This book was a gift from Henry Clay Folger to Reverend S. Parkes Cadman, his pastor at the Central Congregational Church in Brooklyn. Not only did Folger gift Cadman with Luther’s work, but he also lent him a copy of Shakespeare’s First Folio in 1916 for a special sermon entitled, “The Religious and Moral Values of Shakespeare,” in celebration of Shakespeare’s Tercentenary. Cadman and Folger were quite close: Cadman gave Folger’s eulogy, and they were known to have shared many conversations and letters about the connections between Shakespeare and religion. Luther, interpreting St. Paul’s stance on the concept of free will and grace, asserts that “by the righteousness of the law, a man is not pronounced righteous before God but the righteousness of faith God imputeth freely through grace” (62). This particular work of Luther’s is especially relevant, because of Field’s connection to the Bard. Because of their friendship, Shakespeare could have read this work in Field’s shop, thus influencing the appearance of anxiety over free will and the role of grace in Hamlet. 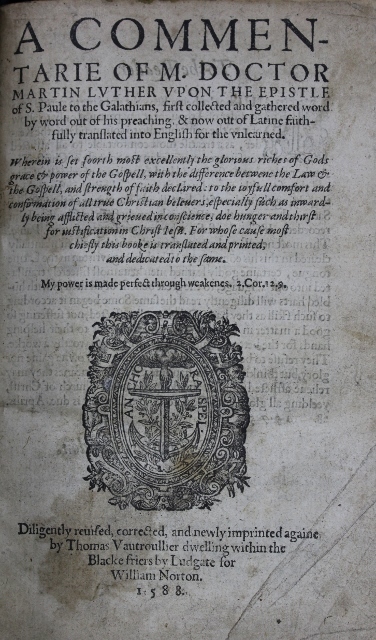 This book is a collection of Martin Luther’s commentary on St. Paul’s epistle to the Galatians. In Luther’s preaching on Galatians, he distinguishes how God is revealed in gospel and law (the former providing salvation and the latter an ethical standard that is important but does not generate salvation). The translation of this book into English is significant as it allowed for accessibility to reformation thought in Elizabethan England. The book was printed by Thomas Vautrollier, a Huguenot refugee; the book is opened to the title page which provides information about Vautrollier’s dwelling near Blackfriars. Vautrollier’s print shop was succeeded by Richard Field, Shakespeare’s friend from Stratford. Additionally, Shakespeare may have been acquainted with Vautrollier and attained knowledge in his printing shop due to evidence that he was familiar with and utilized material that both Vautrollier and Field printed. Perhaps Vautrollier influenced the character Malvolio from Shakespeare’s play Twelfth Night who serves as a representation of Puritanism.