1986-1988: Last Days as Ambassador and a Controversial Degree

Richard Walker’s final year as Ambassador was, perhaps, the calmest of his tenure. His relationship with President Chun Doo Hwan was positive and productive, and he had helped secure the freedom of dissident Kim Dae Jung the previous year. His final year as Ambassador would prove to be almost uneventful compared to the turmoil and upheaval of the previous few years. Such calmness, however, did not follow Walker back to the United States. In May 1986, Walker was invited by Drew University to receive an honorary Doctor of Laws from his alma mater. Walker gladly accepted the honor and made his way to Madison, NJ for Commencement. When it was announced that Walker would be one of the honorees, a group of Korean students at Drew became upset that the university would honor someone who supported the reign of President Chun. Chun was seen by many of these students as a dictator and someone that the United States should not support. They saw Walker as a Chun apologist and supporter and protested his degree. Walker received the degree among the protests and returned to Korea to finish his time as Ambassador. Even after he and his wife, Celeno “Ceny” Walker, left the country, they were still welcomed with open arms. Among their numerous return trips to South Korea was to attend the 1988 Seoul Olympics and Paralympics, which they had both helped to promote during Walker’s tenure. 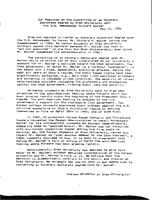 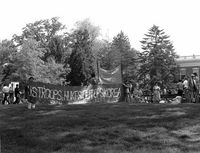 Protest letter from Korean Students at Drew University. The letter outlines their position against the conferring of an honorary doctorate degree to Ambassador Richard L. Walker, May 12, 1986. Accompanied by photograph of students protesting on the lawn outside of Mead Hall on Commencement day, May 17, 1986. 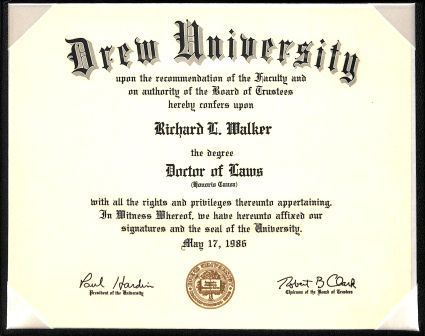 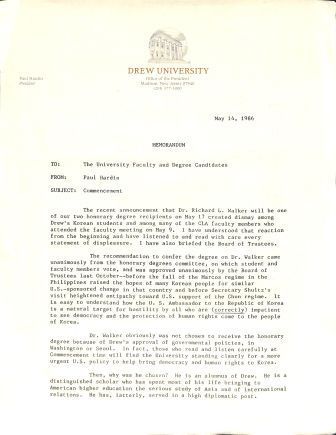 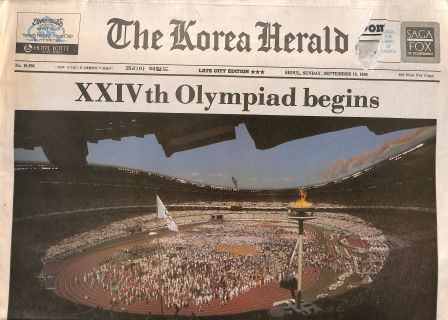 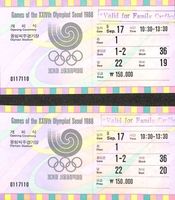 Ambassador and Mrs. Walker’s invitation and tickets to the Opening Ceremony of the Games of the XXIVth Olympiad, September 17, 1988 at the Olympic Stadium in Seoul. 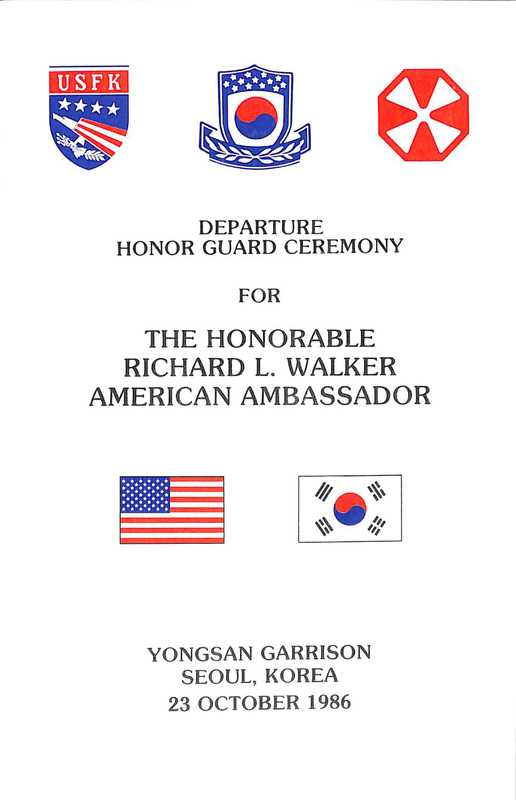 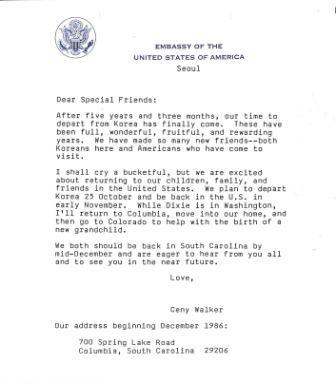 Letter from Ceny Walker to friends in Korea and the United States regarding the Walker’s departure from Korea and their change of address to South Carolina, 1986.

← 1985: Kim Dae Jung and an Eventful Year
The Ambassador in the University →
1986-1988: Last Days as Ambassador and a Controversial Degree