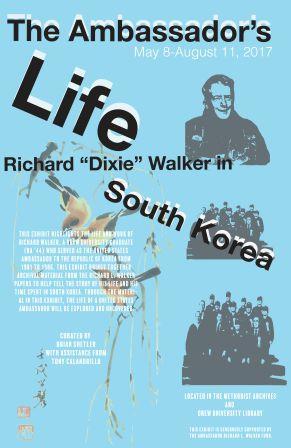 In the second half of the twentieth century, Richard Walker was one of America’s preeminent scholars of East Asian politics and international relations.  His position at the University of South Carolina as the James F. Byrnes Professor of International Relations, Chairman of the Department of International Studies, and Director of the Institute of International Studies was not in an academic ivory tower.  From his position as a Chinese-language officer in Gen. Douglas MacArthur’s World War II Pacific Command to his ambassadorship in the Republic of Korea (South Korea) more than three decades later, Amb. Walker, as a consultant, participant, and critical observer, had been deeply involved in the formation and implementation of American Cold War political and military policy in East Asia and the Pacific. All facets of his career – academic and official – are represented in the Walker Papers collection at Drew University library.

Walker approached East Asian international politics from the realist perspective that “power,” not “norms,” governed state behavior and that in East Asia it was the American strategic presence that deterred Chinese and Soviet threats to American friends and allies.  This was the position he argued as a foreign policy advisor to Ronald Reagan’s presidential campaign.  South Korea was both the northern anchor and tripwire of the American Asian security system. Reagan’s appointment of Walker as ambassador to Korea in April 1981 brought to Seoul an ambassador supportive of his president’s policies and understanding and appreciative of the Korean cultural context within which he had to work. He maintained the confidence of his president and the trust of Korean officialdom for an unprecedented five years at his Seoul post. They were tumultuous and dangerous years: the shoot-down of KAL 007; the North Korean murder of South Korean cabinet ministers; student uprisings; even assassination threats to the ambassador.  He walked a fine line as American support for the Korean alliance was challenged by violent protests against the authoritarian government.  Korean domestic political protest against U.S. policy even spilled over to Drew University when Korean students protested the university’s award of an honorary Doctor of Laws degree Walker (class of 1944) in May 1986.  The high point for both Amb. Walker and his wife Celeno of his tenure in Seoul was the November 1983 State Visit of President Reagan and his wife Nancy. Both the U.S. and Korean sides hailed the trip as a great success, for which the president accorded the ambassador special recognition.

Throughout Richard Walker’s academic and diplomatic career, a central theme in his writing, lecturing, and advising was the great importance of language and cultural awareness in foreign policy and politics.  This was the foundation of the Area Studies approach to education.  To his dismay, on his return to academic life, he saw this swept away in American universities, as data-driven empiricism of number-crunchers triumphed and language requirements gave way to statistics.  It is rare to find the skillset that Walker brought from academia to public service. This is represented in his retiring  positions at the University of South Carolina:  James F. Byrnes Professor Emeritus and Ambassador-in-Residence.

The exhibit cases for "The Ambassador's Life: Richard 'Dixie' Wakler in South Korea" are arranged in chronological order. The material in the exhibit was selected from the Richard L. Walker Papers, an archival collection at Drew University. Each case represents a different part of Walker's life and his time as ambassador.

This exhibit is generously supported by the Abmassador Richard L. Walker Fund.