Book of Common Prayer in the Late 19th and 20th Century

The 1928 revision of the Book of Common Prayer was, like all revisions, a long time in the making, having been started some fifteen years earlier, in 1913. This was only about twenty years after the previous version (that of 1892) had been adopted, which is perhaps a testimony to the conservative and limited extent of that revision. The process took fifteen more years. The commission reported back at several General Conventions, with its work being substantially complete by 1922, and resulting in a proposed book in 1925. The final revision exhibited and expanded ecumenical awareness and a conscious attempt to apply historical liturgical knowledge and insights toward renewal of the church. Many changes were those proposed but not adopted for the 1892 revision which included a new lectionary and many editorial adjustments to the services, prayers and lections. At the time the Anglo-Catholic movement was the dominant school of thought in the Church and the book reflects their doctrinal and liturgical sensibilities. Theologically, the doctrine of real presence (but not that of transubstantiation) became common in the Episcopal Church. The rubric requiring a “north end” position for the celebrant was revised so as to direct the celebrant to stand facing the Holy Table, recognizing what was in fact common practice. With the loss of the litany, the intercessions which were part of the rite were still restricted to “the Whole State of Christ’s Church” and did not include the world at large. A significant doctrinal shift was a petition (not just a Thanksgiving) in the same prayer for the departed. Petitions for the departed were also added elsewhere in the book. Morning Prayer remained the standard Sunday morning service, but with each year that passed after 1928, Holy Communion gained ground. 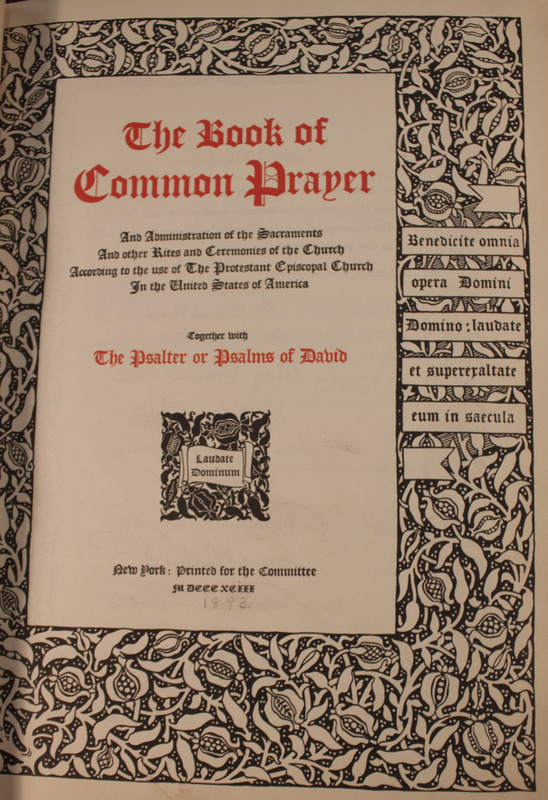 Specially commissioned by financier and member of the church’s liturgy revision committee J. Pierpoint Morgan, this limited edition book was published in New York at the press of Theodore DeVinne, the best-known American printer of his day and educator of the printing industry through his writings. To his print shop foreman DeVinne wrote: “Try to make these books a faultless piece of work. Spare no time or expense. Much of our work is trivial and ephemeral, but this will last.” [quoted in Tichenor, No Art Without Craft.] The printing of this first edition on American handmade in folio (large paper) size with title and text within ornamental floral borders and rubrics in red designed under the supervision of master craftsman Daniel B. Updike. Only the borders for Good Friday are simple black rules. The Easter Sunday border, by contrast, blazes with lilies. The Maser copy is bound in white vellum over boards, spine and front cover elaborately gilt-tooled with brass clasps. Updike was an obvious choice for this task. In an accompanying four-page essay added to the book “On the Decorations of the Limited Edition of the Standard Prayer Book of MDCCCXCII” with separate title page Updike takes great pains to explain the difficulties of combining medieval borders with modern type and his resolution of the problem. He was a life-long Episcopalian and knew the Church and its liturgy. Bertram Goodhue designed the gold-stamped parchment binding, ornate brass clasps, gilt endpapers, and foliated borders. Updike made his name as a liturgical printer for the Episcopal Church. The book which resulted is regarded as ONE OF THE CLASSICS OF AMERICAN BOOK DESIGN. 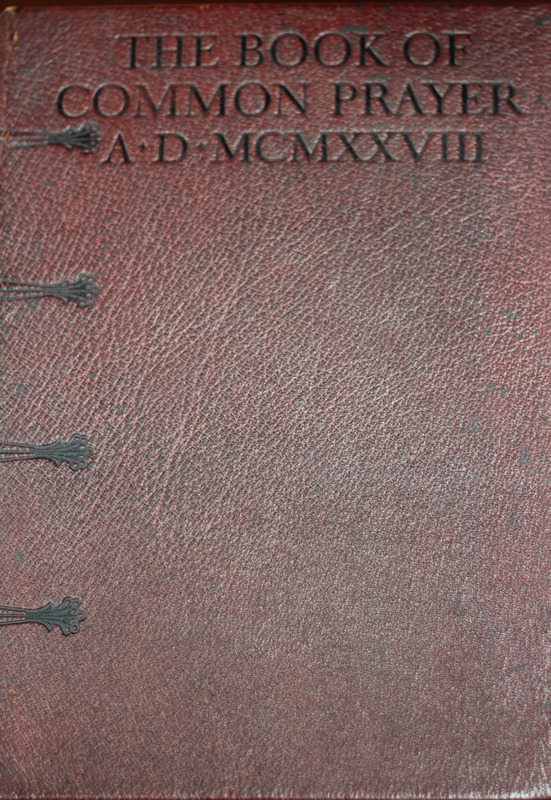 This very special edition of the new “standard” BCP was printed for the Joint Commission on the Revision and Enrichment of the Book of Common Prayer and financed by J. P. Morgan’s son, J. P. Morgan, Jr. Designed again by D. B. Updike, one of a handful of highly successful and influential book designers of the 20th century and proprietor of the Merrymount Press in Boston. Updike’s press was perhaps the finest representative of the Arts and Craft movement in American book arts, influenced by William Morris and founded “to do common work well.”  Several notable American printers and the university presses of Cambridge and Oxford in England were invited to submit designs and specimen pages. Updike’s specimen pages were chosen by the revision commission.

The book, begun in 1928 and finished in the autumn of 1930, was impeccably printed in Janson Type on folio-size on handmade paper. Numbered pages run through 611. The key to the beauty of the book is its utter simplicity. The book is without decoration, except for a typographic leaf and red-inked initial letters and rubrication. The book has been lauded as one of the great monuments of Updike’s career and is considered one of the finest examples of 20th century American book design.  One of only 250 for sale, the Maser copy is bound in fine dark red and black pigskin, ruled and stamped in blind on front cover: The Book of Common Prayer. A,D, MCMXXIII. The Maser copy contains Updike’s eight-page separately printed folio prospectus.