With the death of Oliver Cromwell in 1568 the exile of the prayer book was drawing to an end. Cromwell’s Puritan Commonwealth ended in 1660; the way was open for prominent members of the army to negotiate the restoration of the monarchy and the Prayer Book with the new king Charles II. The following year Charles called a conference at the SavoyPalace London, attended by twelve Anglican bishops and twelve Puritan ministers, with nine assistants from each side, in order to decide on revisions for the  Book of Common Prayer.

The book proposed by the Anglican party was a modest revision of Elizabeth’s 1559 edition.  The first sentence of the restored book’s preface states the familiar idea that the Church of England seeks a via media, a middle way, between Roman Catholicism and reformed Protestantism—but here is cast in terms of flexibility:

It hath been the wisdom of the Church of England, ever since the first compiling of her public Liturgy to keep the mean between two extremes, of too much stiffness in refusing, and of too much easiness in admitting any variation from it.

Changes were mainly in rubrics. For the rite of Baptism provision was made for  blessing the water.  For the Holy Communion the people were directed to stand for the Gospel and the Creed.  The revisers re-titled the prayer containing the words of institution the “Prayer of Consecration” (now called the Eucharistic Prayer) and mandated manual acts (touching the bread and wine) during the recital of the institution narrative—“on the night in which he was betrayed the Lord took bread….” The white surplice was enjoined and the communion table was to be placed against the east wall and railed in with altar rails and kneelers. The new/old Prayer Book was issued with a new Act of Uniformity in May 1662 and to take effect on St. Bartholomew’s Day, August 24.

Attempts by the Puritans to gain approval for an alternative service book failed. As a result, the majority of Puritans defected from the Church of England. The new Parliament, however, was in no mood to appease any that they deemed responsible for the turmoil of the previous decades. Approximately two thousand priests, most of them Puritans, refused to sign the oath of loyalty and were summarily de-frocked. 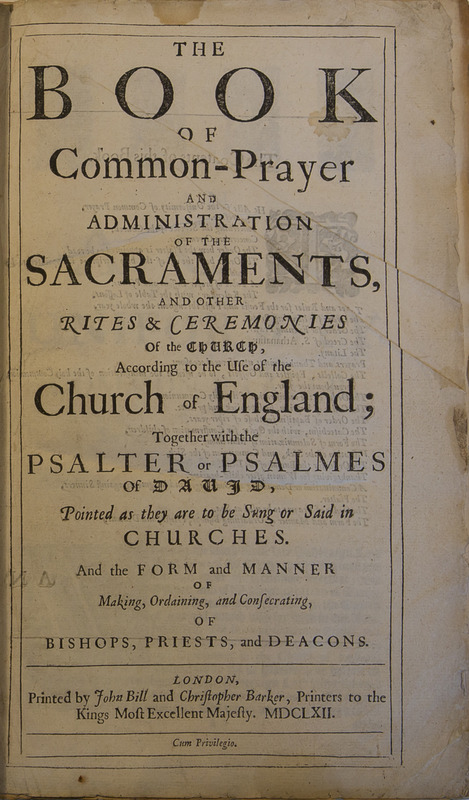 Printed under crown license by John Bill and Christopher Barker, this first 1662 folio edition contains an elaborately decorated title page, featuring a neo-classical basilica engraved and signed by David Loggan after original drawings by Jan Baptist Gaspers surrounded by an engraved architectural border. The Calendar is printed in red and black with head and tail pieces, initials and printed marginal notes. The Psalter or Psalms of David, after the Tyndale translation of Henry VIII’s Great Bible, has a separate dated title-page within red and black rules. “The Form and Manner of Making, Ordaining and Consecrating Bishops” has separate half-title, register is continuous. Bound in contemporary brown calf, re-backed with some original binding on front and back covers.