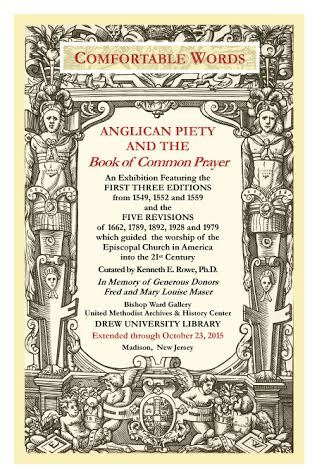 This exhibition of the four hundred year old Book of Common Prayer and its progeny showcases a book that is not only used for public worship and private prayer but, by its liturgical excellence, holds a special place in the evolution of English language and literature. Archbishop Cranmer’s somberly magnificent prose, read week by week, entered and possessed the minds of many English-speaking Christians and became the fabric of their prayer, the utterance of their most solemn and their most vulnerable moments.

The prayer book has also been the crowning masterpiece of the world’s greatest typographers and printers, from Whitchurch in the 1540s to Daye in the 1570s, from Baskett and Baskerville in the mid-1700s to Pickering in the 1840s and DeVinne in the 1890s on down to Updike in the 1930s. Fine binders like Mearne in the 1660s along with Riviere and Zaehnsdorf in the 1880s among others  lavished their art on the prayer book, customizing them with magnificent decoration evident in the fine printings and bindings you will see displayed.

At the time of the Reformation (the mid 16th century) King Henry VIII’s youthful Archbishop Thomas Cranmer had a compelling vision—to convert England to a deeper understanding and appreciation of the Gospel of Christ. At the heart of the church’s reformation he envisioned was the assumption that the Holy Scripture, the prayer and the song of the Church must be in a language understood by the people of God. His translation of the Latin mass into English provided worshippers with a largely Catholic communion service with Protestant additions.

Throughout the Book of Common Prayer Archbishop Cranmer introduced large portions of Scripture into the prayer life of home and church. He added four verses from Scripture to the Communion rite following the General Confession and Absolution to underscore a very important fact: Christians believe baptized church members are forgiven through the merits and mediation of Jesus Christ. Forgiveness does not come from a priest, the church, or even a special prayer. It comes through Christ alone.

Hear what comfortable words our Saviour Christ saith unto all who truly turn unto him, “Come unto me all you that are weary and are carrying heavy burdens, and I will give you rest.” Matthew 11:28, “For God so loved the world that he gave his only son, so that everyone who believes in him may not perish but may have eternal life,”  John 3:16. “This is a true saying, and worthy of all men to be received, that Christ Jesus came into the world to save sinners.” I Timothy 1:15    “If any man sin, we have an Advocate with the Father, Jesus Christ the righteous; and he is the perfect offering for our sins, and not for ours only, but for the sins of the whole world.” I John 2:1-2.

For almost 500 years these verses that Cranmer chose to name “Comfortable Words” have been spoken in churches around the globe. Episcopalians still hear these verses in Holy Eucharist Rite I. The words are not intended to “comfort” believers in the modern sense of the word; rather, they are meant to “strengthen” believers with the assurance of forgiveness­­­.