The old King died in January 1547. To the throne of England came EDWARD VI, a precocious, but sickly boy of ten. The lad’s uncle, Lord Somerset, a patron of Protestant reform, assumed control of the government. Cranmer now had a free hand in reforming the doctrine and worship of the church, reforms that Henry had scrupled neither to promote nor to proscribe.  And reform them Cranmer did.

It is the reading and preaching of the Bible that Cranmer first wanted to ensure. Sermons were rarely preached, and when preached were rarely useful or doctrinally sound, i.e., grounded in the Protestant Gospel of justification  by faith alone. To remedy that deficiency within a year (1547)  a Book of Homilies ensured that Reformation/Protestant teaching was heard in every church in the land when there was not a sermon by a licensed preacher ––and they were not very thick on the ground. With better priestly formation and regular hearing of doctrinally sound preaching or authorized homilies, congregations were to be formed in correct belief and behavior.

At the same time Cranmer contemplated another task, preparing an English liturgy for the part of the traditional Mass during which laypersons receive the bread and the wine. For centuries laypersons received Communion rarely, perhaps once a year (usually at Easter) and in “one kind” (i.e., bread only, no wine). The archbishop was determined to make Communion much more frequent, administered in both kinds (bread and wine) and to create a liturgy which explained to laypersons what they were and were not doing when they consumed the elements.

Before its general launch, the new English mass was adopted at the Chapel Royal in St. James’s Palace, London, September 1548 and then foisted upon the colleges of Oxford and Cambridge. This was many months in advance of its general introduction, and can probably be interpreted as another of the government’s testing of the waters. Before year’s end(1548)a Royal Commission was appointed to prepare a new service book.

Archbishop Cranmer, “with the aid of the Holy Ghost” and “certain of the most learned and discreet Bishops and other learned men,” borrowed freely from the Sarum Missal and added many original prayers and Scriptural declarations such as “the Comfortable Words.” The format, substance and style were primarily Cranmer’s work. 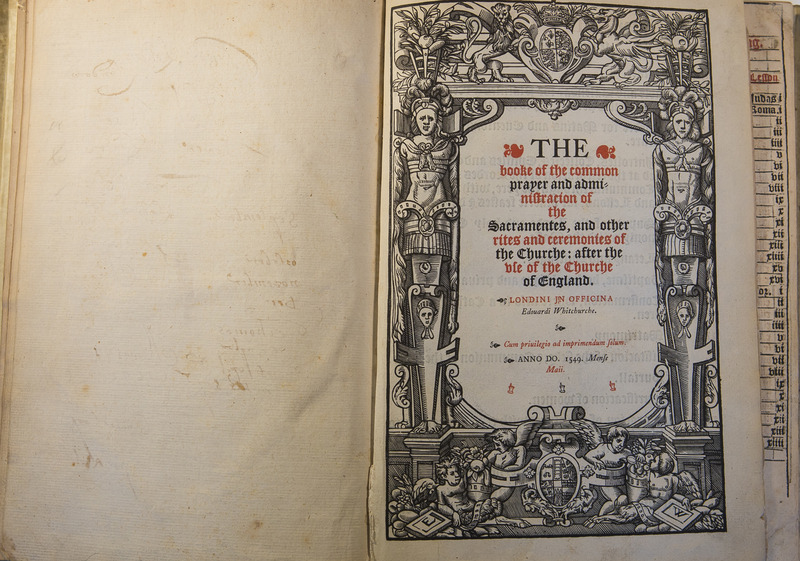 Master printer and bookseller Edward Whitchurch (d.1562), an ardent adherent of Reformation doctrines, had already associated himself with Richard Grafton to circulate Matthew's [English] Bible printed at Antwerp. In 1538 he and Grafton gave financial assistance to Miles Coverdale in printing his English New Testament at Paris and in 1539 they published the Great Bible in London. Together they were Godparents to the first Book of Common Prayer.

The first Maser display copy, opened to show the exquisitely decorated title page, is one of the exceedingly rare first editions / first issues printed in London in March 7, 1549, though marred by a few missing pages. The title-page is printed in black and red. An elaborate engraved architectural border of angels and saints and scrolls and leaves is crowned with the royal arms. Whitchurch’s initials are clearly visible in the plaques at the lower left and right. The text itself is printed in black letter type on folio-size laid paper, with red appearing only on the title page and in the liturgical calendar. Wood-engraved typographic initials and decorated letters of varying sizes and intricacy are scattered about throughout the book. The Maser copy is bound in full vellum with all edges gilt. 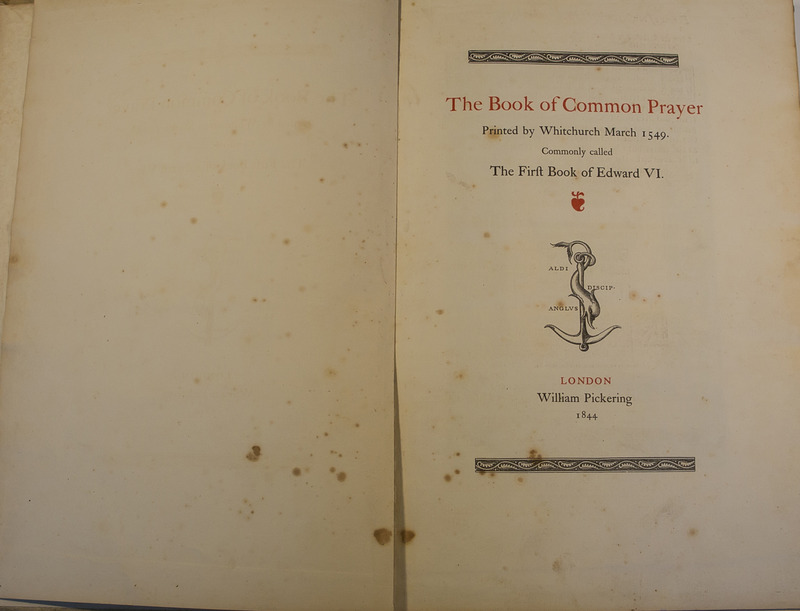 The Maser copy of a beautiful Victorian era reprint also displayed is opened to the Communion Service. 1844 was a particularly fruitful time for prayer book design. That year William Pickering, the London Publisher famed for the beauty of his typography, issued an elegant reprint of six historic prayer books, all in folio size, based closely on the prayer books of 1549,  Merbecke’s 1550 Prayer Book Noted, 1552, 1604, 1637 and 1662. But they are not facsimiles. Printing historians call Pickering the first conspicuous figure in the emerging separation of book design from printing. Pickering employed the Chiswick Press, founded in 1811, headed by Charles Whittingham and noted for careful printing. The first volume in the series reproduced the 1549 prayer book. Pickering insisted on good design, good materials, and precise and careful presswork. The ornate title-page borders were designed and engraved in wood by Mary Byfield. The title is printed in black-letter type. Throughout, the book is enhanced by the use of beautiful calligraphic style initial letters. The book is bound in full vellum over boards with gold fillet border and black leather spine labels.