Over the years the prayer book attracted a number of printers and engravers to produce “fancy,” often richly decorated volumes, to appeal to wealthy customers. Probably the most ingenious and, in some ways, the most beautiful of the Prayer Books are the ones engraved by John Sturt beginning in 1717.  Sturt (1658-1730)  at the age of seventeen was apprenticed to Robert White, in whose manner he engraved a number of small portraits as frontispieces to books. At one time he kept a drawing school in St. Paul's churchyard. He gained fame for a calligraphic manual, but his masterpiece is surely this edition of the prayer book which he engraved by hand with marvelous neatness on 188 silver plates rather that the standard copper. This medium enabled the artist to achieve the most extraordinarily minute detail. The entire project took three years to complete and was financed by the sale of advance subscriptions, very common in those times.

The patent of the “Printer to the King’s Most Excellent Majesty” changed hands from the Barker family to the Baskett family in 1709. Master printer John Baskett acquired a license to print the Book of Common Prayer in 1711, when he brought out editions in several sizes and price ranges. 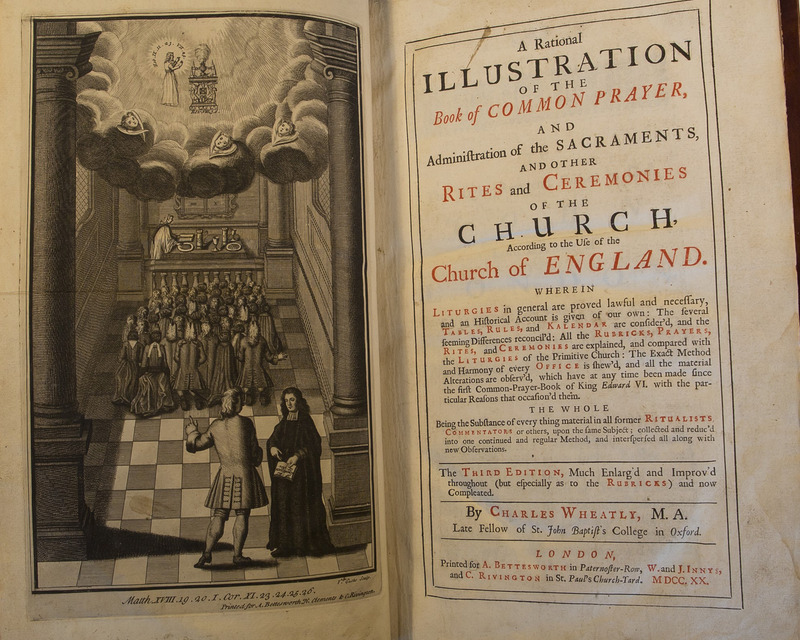 Action shots of Holy Communion services in the early centuries of the prayer book’s life are rare. A Rational Illustration included a rare glimpse into an 18th century celebration of Holy Communion.

A congregation is kneeling, facing away from the viewer and towards the Holy Table which stands further to the east, behind a heavy rail. On it are a Prayer Book, two plates with bread (not wafers), chalices and flagons of wine. The celebrant, wearing a white surplice, academic hood, and scarf is standing at the north (left) end. A communicant, looking at the unadorned table and the plainly vested celebrant, sees the heavenly altar at which Christ in glory offers his continual sacrifice.

To further distance themselves from Catholic practice, Cranmer and most Anglican priests celebrated from the north end rather than in front of the altar facing the “east” wall with their backs to the people. 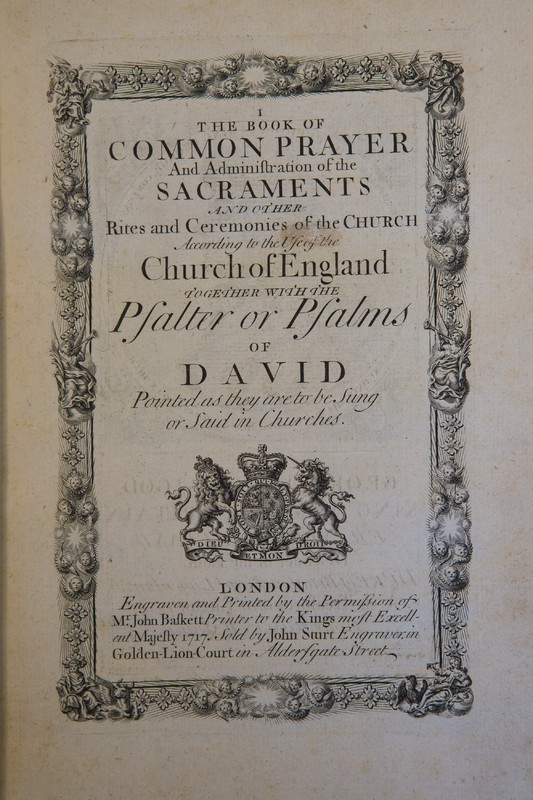 The book is a large paper copy—ten inches tall—but the text is very small and requires a magnifying lens (or very sharp eyesight) to read. None of the book is typeset. Rather the entire book is beautifully engraved in cursive italic script throughout on smooth, thick plate paper. Each page is surrounded by delicate symbolical borders containing musical instruments, cherubs, fruit, flowers, and many pages of the main text include one or more of a total of 129 different engraved scenes relevant to the particular text, 189 silver plates in all. Prefixed is a portrait of King George I, the lines on the king’s face being made by an inscription of the Lord’s Prayer, the Ten Commandments, the Creed, the Prayers for the Royal Family, and the 21st Psalm, all in writing so minute as scarcely to be read with the aid of a microscope.

The Maser copy is beautifully bound in 18th century red morocco, gilt tooled, double fillet panel borders on covers, paneled back with gilt diamond-shaped ornaments, and gilt edges. The rare volvelle, a circular paper dial which rotates on a string pivot used to find liturgical seasons and feasts and fast days, is in place and unsullied by time or abuse.

Information wheels (graduated movable paper circles-within-circles)—VOLVELLES as they are called—have been used since the thirteenth century to measure, record, predict, and calculate everything from the movement of heavenly bodies to oceanic tides. Some of the earliest volvelles are found in liturgical books helping clergy and laity to keep track of liturgical time. John Sturt included one in his upmarket prayer book of 1717.

Today, though their functions have been largely replaced by computers, these unique artifacts are not only clever and amusing, but still relevant as a model for modern interactive design. The 20th century saw a mass audience develop for volvelles, often referred to as “wheel charts,” representing an enormous range of topics from astronomy to toys, from history to zoology, and from previewing color combinations to mixing cocktails. Persons interested in information design seek them out, while those interested in book and graphic design are thrilled by the surprise of finding them in ancient texts. 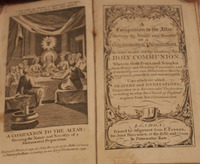