The invention of the printing press greatly changed the ways in which books were created. Although books were commercially produced during the manuscript era, the printing press allowed for mass quantities of texts to be delivered at a faster pace. Printers could generate up to 240 pages per hour, not including the time it took to set the type.

Printing not only allowed for the mass production of texts, but also cut the costs involved in the creation of books. With greater access to books, a larger reading public grew, creating an audience for books such as the Shakespeare First Folio. 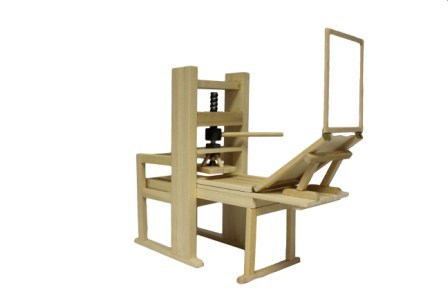 This miniature press, assembled by Cassie Brand, was modeled after Gutenberg’s printing press, created circa 1450. This press was used to print books in Shakespeare’s time. Though small improvements were made to Gutenberg’s design, the press remained mainly unchanged until the machine press era in the nineteenth-century. 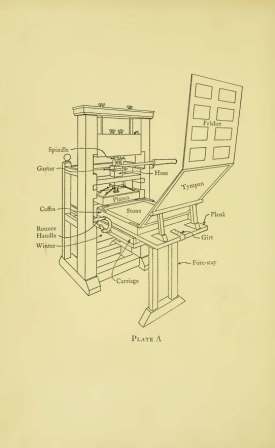 Anatomy of a Press

The image here shows the parts of the press. The paper was attached to the tympan while the frisket protected the portions of the page that would not be printed. The bed of type would be laid on the stone, before rolling it underneath the platen. The platen was then lowered to press the paper onto the type. 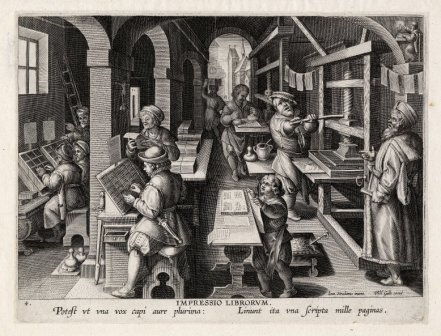 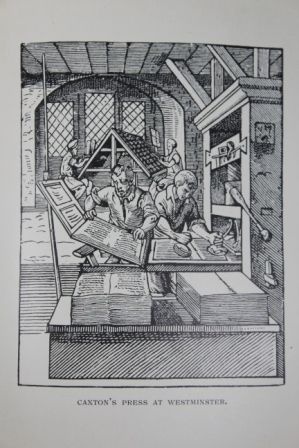 Gerring, Charles. Notes on printers and booksellers: with a chapter on chap books, 1900.

Each image shows the bustling nature of the print shop, where men worked as quickly as possible. Compositors stand in front of cases setting the type and the beater and pressman make the impressions. The beater would use balls covered in ink to beat the type, inking it evenly, before the pressman would pull the lever to lower the platen and press the paper onto the type.