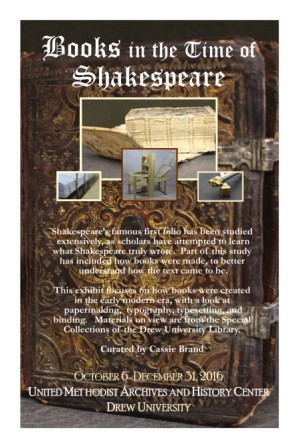 When Henry Clay Folger began collecting Shakespeare, it was considered bad form to collect more than one copy of a book. However, Folger collected 82 copies of the First Folio. While others discarded their duplicate copies, Folger and his wife Emily understood that each book was unique. Each copy of the First Folio has small changes and details that differentiate it from the other copies in the edition. The book’s provenance, or history, adds to the uniqueness of each copy. Previous owners wrote in the margins, rebound the books, or lost pages. The ways in which books were made in Shakespeare’s time also creates many differences between copies, which are noted throughout the exhibit.

Scholars have studied the variations between copies of the First Folio to better understand what Shakespeare wrote. Though they have tried to determine exactly what was Shakespeare’s original text, this is not possible due to the ways in which book were printed. The people involved in the printing of the book, including the actors who compiled the text, each introduced changes to what Shakespeare originally intended.

By studying how books are made, scholars can better understand the conditions in which Shakespeare’s plays were preserved and passed down throughout the four centuries since his death.

Henry Clay and Emily Folger understood the differences created through the book making process. Their collection allows scholars to study these variations side-by-side. Though scholars may never know exactly what Shakespeare wrote, they will continue to study the book as an object to give insight into Shakespeare and his First Folio.