In Shakespeare’s time, paper was made from rags that were fermented in large vats at the paper mill. The fermentation allowed the rags to break down and turn into a slurry mix called “stuff,” which is the technical term for the broken down fibers. Paper mills often employed beating or stamping the stuff to assist the rags in breaking down. Because of the large amounts of water and power needed for making paper, paper mills were often located near a source of running water.

The size differences in books are based on how many times each piece of paper is folded. Each sheet of paper could have two, four, eight, or sixteen pages printed on each side, depending on the layout of the text. For example, the First Folio contains sheets of paper folded once, which accounts for the large size of the book. 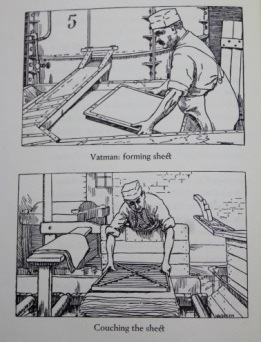 Barry, Thomas. Papermaking; a brief account of the history and tradition of this very ancient hand craft. 1939.

This series of woodcut illustrations shows the process of making paper. The vatman would use a mould and deckle to form the sheets of paper. He would transfer or “couch” the sheet to another surface, interleaving the sheets with pieces of felt. They would press any remaining water out of the sheets before hanging them to dry, usually in the attic of the paper mill. 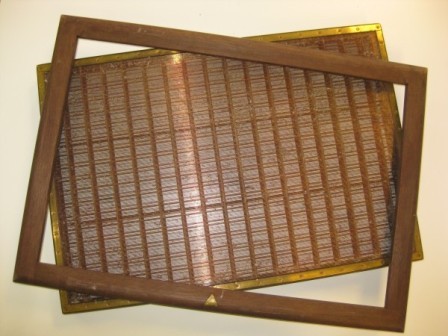 Paper is made using a mould and deckle. The mould has chainlines running across the short end of the frame with smaller wires woven into a mesh. Often the paper mill would weave a design into the frame, which functioned as a sort of logo for the mill. This design is called a watermark. The deckle is placed into the mould and is used to keep the “stuff” in place while making the paper. The edge of the paper is irregular before being cut and is referred to as a “deckle edge.” 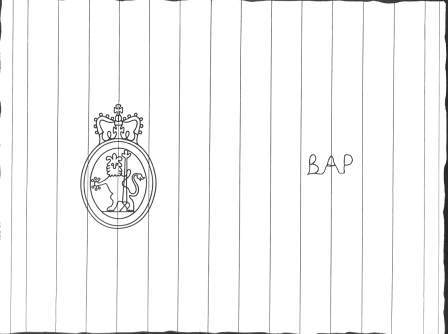 This sheet, used to teach about paper, shows the chainlines and watermark found in hand laid paper. When making paper with a mould and deckle, the water flows slightly faster around the wires, making the paper slightly thinner at the chainlines and the watermark. This creates a design in the paper, that can often only be seen when held up to the light. Watermarks and chainlines are used to determine the format of the paper, or how many times the sheet has been folded. 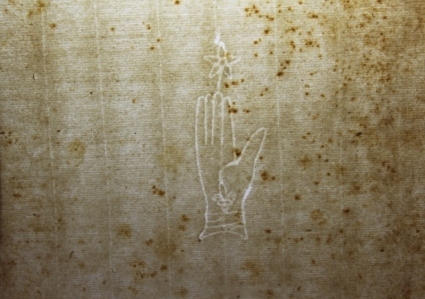 Paper from the Journal of Henry VIII

This piece of paper came from a journal in which King Henry VIII wrote a treatise against Martin Luther in 1521. He did not write on this particular page, which makes it is easier to see the chainlines and watermark. The watermark here shows a hand and a star, with a small fleur-de-lis, which are common elements in watermarks.