In Shakespeare’s time, there were two main techniques used to illustrate printed books: woodcuts and engravings.

Woodcuts are made by cutting away the spaces intended to be blank space, leaving the image raised on the block. Because the lines on the woodcuts are raised, similar to pieces of type, woodcuts can be printed with the type through the same process. This allows for image and text to accompany each other on the same page with ease.

Engravings are made by cutting an image into a metal plate, usually made of copper, zinc, or steel. Ink is rubbed on the plate and subsequently wiped away, leaving ink only in the areas that have been carved away. When rolled through a press, the ink is squeezed out onto the page. Engravings are often printed on heavier paper than the rest of the book and require a different type of press than the pages of the book. Therefore, engravings often appear on separate pages from the text. 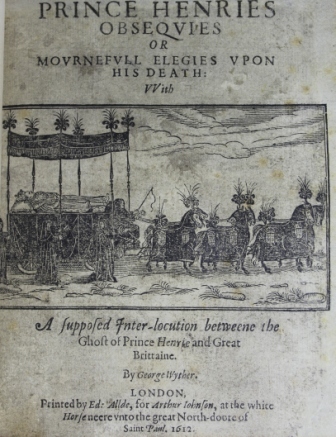 This woodcut on the title page shows how text and page could be easily printed together on one page. The image illustrates the funeral procession of Prince Henry while the text includes a fictional conversation with Prince Henry’s ghost. 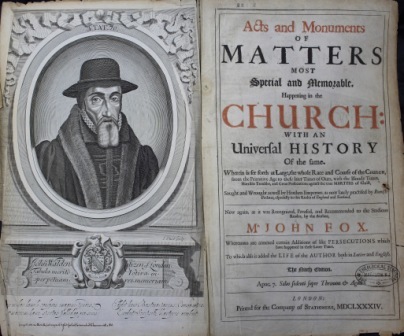 This author portrait of John Foxe is engraved, which allows for finer detail and shading than woodcut illustration. This book, often referred to as Foxe’s Book of Martyrs, features the stories of Christians, some of whom served as inspiration for Shakespeare and appear in his plays. More information, as well as volume three of the set, can be found on display in Will and the Word. 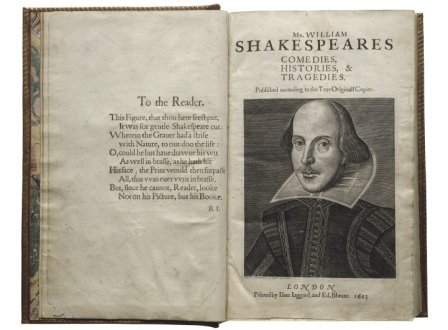 This posthumous portrait, from the title page of the First Folio, was engraved by artist Martin Droeshout when he was only 22 years old. This portrait is one of two images considered to be a true likeness of Shakespeare. This page was printed twice: once using a rotary press to create the engraving, and a second time on a hand press to add the text.