In the early modern period, pages were proofread and corrected while printing was in progress. This meant that individual copies of books have differences within a single edition of the text.

The First Folio has many such variants between individual copies of the books, which is one of the reasons that scholars study the text so closely. Some of the variations are typos that are corrected during the printing process, while others may be pieces of type that break and are subsequently replaced. By studying these corrections and replacements of the broken type, scholars can deduce the order in which the copies were printed. This helps scholars understand what was intended, versus what was a typo. 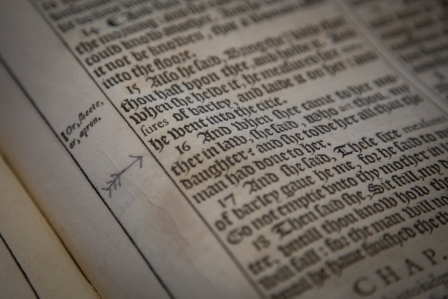 The first edition of the King James Bible, printed during Shakespeare’s lifetime, is nicknamed for its typos. The error shown here is an example of a typo that was fixed partway through the printing of the edition. In Ruth 3:15, Ruth is referred to as “he,” which is why this printing is called the “He Bible.” The typo was corrected for the remaining pages of the print run, creating variants within the first edition of the book. The printings of the corrected version are referred to as the “She Bible.” 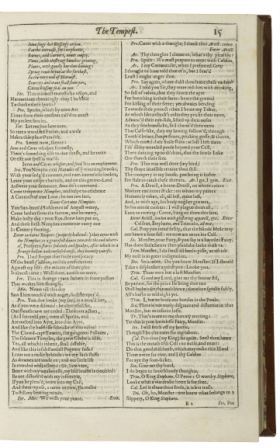 Broken Type in the First Folio

This is an example of a piece of broken type in Shakespeare’s First Folio. This piece may have been broken before the type was set, or it could have broken during the printing of the First Folio. Every First Folio is different in many ways. Due to small editing changes, such as fixing broken type, the text of each copy of the edition varies slightly. This example, features a broken “f” in the word “wife.” The broken type makes it look like the word should be “wise”, spelled with the long “s”. Because of this broken type, scholars have debated over which word was intended.