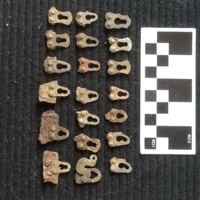 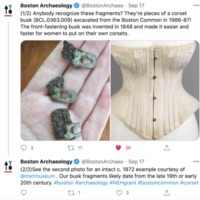 Corsets of the 19th century reflected a more natural form of the female body. Though the hourglass figure and small waist were still coveted, the waistline of the corset dropped to a natural position compared to earlier designs of the corset. The fashion of the era called for high waisted and long flowing dresses, requiring heavily boned corsetry and tight lacing to achieve the desired figure. To ease this intense process of lacing, French Corsetier, Jean-Julien Josselin, invented the split busk in 1829, a front facing slot and stud closure to remove a corset without unlacing. This became extremely popular after Joseph Cooper patented the design in 1848 in America.
Corsets were used by all women, regardless of class, to represent and showcase their beauty. These undergarments were even used on young children and teenage girls to begin shaping their bodies and preparing for womanhood. 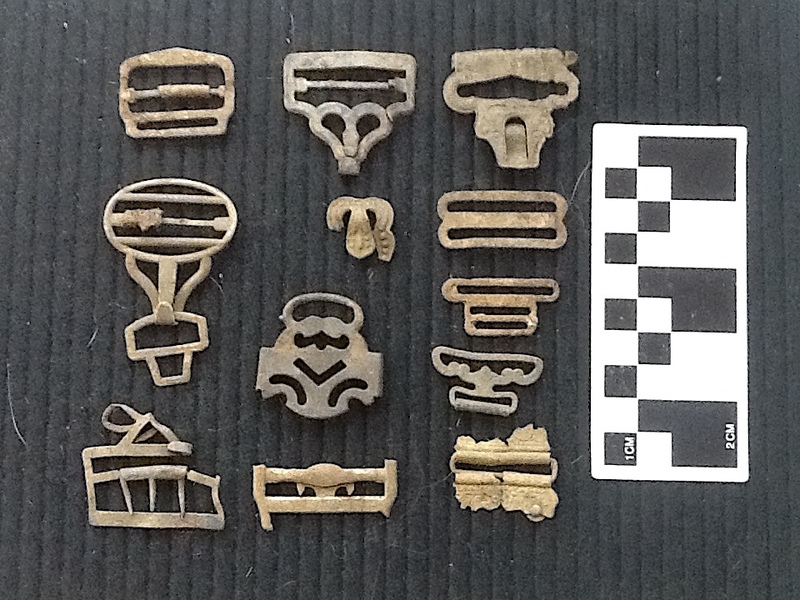 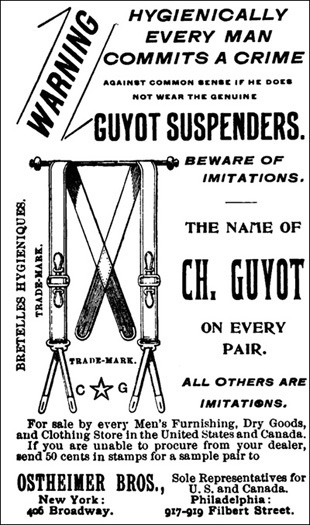 Selling at 60 cents a pair in 1907 (New York Times advertisement) the suspenders with these clasps were advertised as a European style for gentlemen and were priced quite high for the era as a luxury product. The brand had many French and German advertisements and only a few advertisements had photos in the records of the New York Public Library. The advertisements appear to be targeted to upperclass men shown fencing and in pursuits associated with the wealthier class.

Ostheimer Bros in Philadelphia and New York figure in advertisements as distributors of the suspenders and an emphasis is on "Genuine Guyot Suspenders". There were issues about imitations and therefore one had to look for the CH Guyot and stars stamped on the metal pieces.

Suspenders with CH Guyot adjuster clasps like those found in Chatham are in the Webb Cook Hayes Collection at the Rutherford B. Hayes Presidential Library and Museums Catalog #1934.236.12. They are listed as associated with WWI.
https://rbhayes.pastperfectonline.com/webobject/0D5368BA-68FE-4238-A6F8-476103406830

The significance of these data and objects for the Chatham Township site is that it provides additional chronological placement as well as provides information on what was being produced and manufactured at the Stanley Mill which was located in the area of the site where these artifacts are found. Similar artifacts are visible across the surface of the western mill area and in the same area where remnants of felt are found along with buttons, bricks and metal machine pieces. 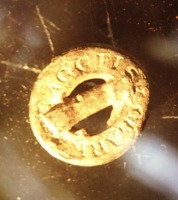 Fisk, Clark & Flagg was founded in 1867 by Henry G. Fisk, Thomas R. Clark and Thomas J. Flagg, “for the purpose of manufacturing and selling gloves, neckwear and other articles of men's attire.” (Fisk v. Fisk, Clark Flagg, 37 Misc. 737, (N.Y. Misc. 1902)). The firm established a well-known name for themselves in their trade and manufacturing, producing high quality goods and becoming a leading figure in lines of gloves, furnishing goods, and shirt waists. They first began business in White Street, New York City, and then moved to several other locations in NYC throughout the decades including 690 Broadway, 686 Broadway, 5 Washington Place, and very briefly, 85 Fifth Avenue.

Being that Fisk, Clark & Flagg produced a series of premium clothing and home goods, the men and women of early Chatham belonged most likely to a higher social class. The close vicinity to NYC allowed clothing stores to be conveniently stocked with these goods, demonstrating a close connection between the distribution of goods across states and cities in America.