Complete examples of this bottle type with this same embossing are from John Wyeth & Bro. and the bottle rim would have had a dose glass resting on it and the bottle said “TAKE NEXT DOSE AT” and then a mark so the dose glass can be rotated to the hour marked at its base.

This type of bottle was patented in 1899. Only the older bottles from this manufacturer are blue but it is not known when this bottle color was phased out. These bottles were handblown until 1910 which is also around the estimated time when the deep cobalt blue was discontinued.

This bottle represents a medicine bottle but since the same bottle was used for various medicines it is impossible to say for sure which type of medicine, but the same shape of bottle with its label intact contained sodium phosphate; “A mild and pleasant Laxative Employed in the Treatment of Constipation, Obesity, Children’s Diarrhea, Rickets, Jaundice, etc."

In comparison the glass fragments found in the Sapio Creek and the Passaic River depict the same exact disc shaped emblem in size and pattern. The largest block print lettering when transposing one fragment over the other spells out the letters (fragment) M, A (fragment) C or G, N, E, S, I, (fragment) A. This transposition is possible because of the opacity of the glass and the cyclical curve of the center emblem. Although the full circle is no longer existing, the two curved structures when layered on top of each other spell the word magnesia. The Sapio Creek fragment’s color is a distinctive dark indigo blue, that when compared with the Passaic river fragment, they both seem to share the same base tint, even though the fragment of the Passaic river is much visibly lighter.

Phillips' Milk of Magnesia has provided stimulant-free relief of constipation for over 125 years. The original formula was introduced in 1872. Other than the original use of Milk of Magnesia as a supplemental laxative, it is also advertised as a face astringent and a deodorant. 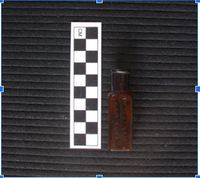 Boericke & Tafel was a pharmaceutical company specializing in homeopathic medicines and remedies. Comparative examples of this amber glass bottle can be found on the internet and is described as containing pills and manufactured in the 1890’s in New York.
Before Boericke & Tafel was founded, the origins of the company can be traced to Dr. Constantine Hering, the father of american homeopathy. He practiced in Philadelphia, PA and Hans Burch Ham, NY and founded one of the first homeopathic medical colleges in America. His best selling books influenced many other practitioners of homeopathy, such as William Radde, who was a bookstore manager for J. G. Wesselhoeft. He was relocated from PA to the NY branch of the bookstore and began selling homeopathic remedies. Eventually, William Radde became the sole owner of the franchise, which, “In 1869, F. E. Boericke and A. J. Tafel formed the partnership under the name of Boericke and Tafel. Together they bought the pharmacy and book-publishing business of William Radde in New York City. A. J. Tafel moved to New York to manage the business.” (http://www.herbmuseum.ca/content/boericke-tafel).

Homeopathy gave rise in the 19th century especially after the 1849 cholera epidemic. “Because of the superior results achieved by homeopathic physicians, many orthodox doctors took up the practice of homeopathy. At the same time, many of the intelligentsia were attracted to homeopathy because of its scientific basis in experimental pharmacology.” (http://www.homeoint.org/cazalet/boericke/story.htm)

Homeopathic remedies are still produced under the name Boericke and Tafel today. The amber hue of the bottle was probably to protect photosensitive contents. A variety of compounds could have been contained in this bottle, and they were even sold as “kits” that contained a number of remedites. Typically, there was a paper label adhered to each bottle.

← What to Wear?
Conclusions & Interpretations →
What's Up Doc?