Pat Wells of The Chatham Township Historical Society, and Sarah Stanley and her husband Don Davidson, were able to provide us with some oral histories of Chatham, as well as of George Shepard Page and his mills.  Sarah is related to the Page family through George’s mother, also a Stanley.  She was the reason behind so many of the buildings and locations in Chatham being named Stanley, a family of successful inventors, like himself.  From the moment Page reached Chatham, he loved the location, but unfortunately the land was limited on the Chatham side of the river due to steep banks, so he had to build his mills on the Summit side, though everything else he established was in either Chatham proper or the outskirts.

George Shepard Page was originally in the coal tar business, as his father had been.  Coal tar is actually a useless byproduct of gas, which was used for lighting in the 1800s.  Samuel Page realized he could use this byproduct, simultaneously getting rid of a waste product, and making a profit.  He figured out how to turn it into creosote to saturate wood so that marine animals couldn’t get into the hulls of ships.  His son, George, left the business behind in Maine, and moved to New York with his wife and children in order to start The New York Tar Company with two other entrepreneurs.  They worked on making waterproof roofing from felt soaked in coal tar.  Unfortunately, two of his children died due to consumption, and this prompted George Page to find a cleaner place to live.  He took many trains out into the New Jersey countryside, but when he saw Chatham/Summit, the Passaic River, and the surrounding areas filled with decrepit mills, he knew that was the perfect place to move his family. 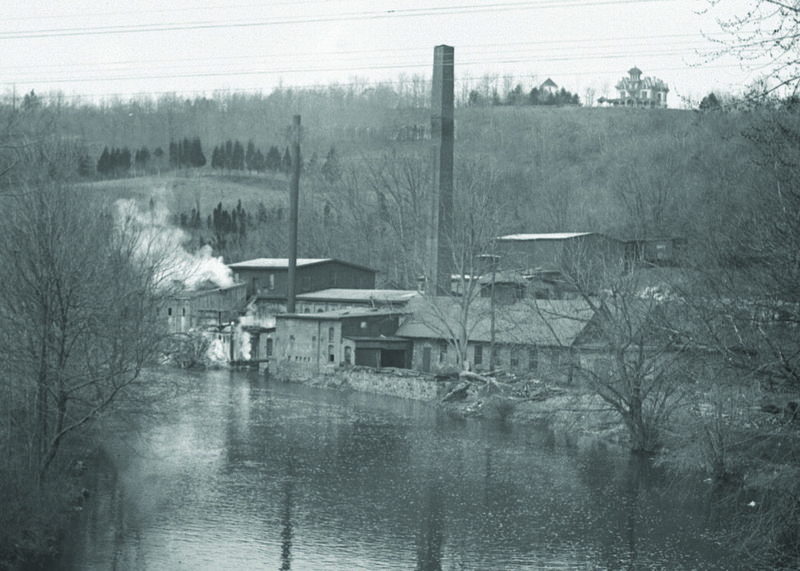 He purchased the land and the mills from the Bonnel family, and started his roofing mill out of an old tar paper and grist mill.  The process included importing felt, made from wool, to the mill, as well the tar base.  The fact that the rail line ran right next to and across the river was incredibly helpful to the production of the mill.  The tar was heated, and the felt was soaked in it, and finally allowed to cool and dry so that it could be rolled into roofing sheets without sticking to itself.  The mill itself was very successful because it was right on the river, which was dammed, and next to the rail line.

Sadly, George Page died in 1892, and the mills became derelict, as his children didn’t want to be involved with the upkeep, though they did keep up the production of Vapo Cresolene (an oil for lamps) offsite.  Though a candy factory, which made cream tartlets, set up shop in his mill shortly after he died, once the factory went out of business, the mills all got torn down, and there is no longer any remnants of them.

While alive, George Shepard Page was a remarkable man, incredibly forward thinking, open minded, and progressive.  He figured out how to transport trout eggs so that could restock the overfished Passaic River.  He also testified in Congress to get the Department of Fisheries funded for the first time.  Though he loved New Jersey, he also loved to travel, mainly to England and Scotland.  Page went to Europe and looked at machinery that he needed for his business, and brought those plans back to the United States.  England was much more advanced industry wise, and so Page really was the father of the coal tar franchise in the US. He wanted to support and promote the coal tar and oil industry, even though we know now how terrible it is for the environment.

Page was really remarkable in how much he advocated for workers rights.  Most of his mill workers were immigrants, some from Germany.  He imported things from their respective countries to be sold in the workers store next to the mills, so that they could have the comforts of home.  He owned the property next to the mills where he let them build their houses, the store, and a community hall for school.  In downtown Chatham, Page created other stores, a church, and a post office (where he was the Postmaster), naming them all after his mother.  George Shepard Page was a truly incredible man, and there is no telling what more he could have accomplished had he not died so young.