This Bateman illustration is notable for technique and its subject. Looking closely at the faces of the girls and the proportions of their bodies, one can clearly see the resemblance of the engraving to a highly detailed photograph. The uncanny effect, achieved by an engraving from a daguerrotype, is enhanced by the surprise of seeing two young girls playing male, tragic Shakespearean roles.

Surrounded by images and always carrying a camera in pocket, it is hard to imagine a world before photography. In 1839 Romantic painter and inventor of the Diorama, Louis-Jacques-Mande Daguerre (1787-1851) revealed a new process that changed both the scientific and artistic worlds: the daguerreotype.

The daguerreotype was the first viable method of capturing a permanent image with a camera.  Working together with scientist Joseph Nicephore Niepce, Daguerre invented the process of capturing permanent images on silver coated copper plates with an exposure time of just 20 minutes. Developments by Richard Beard in the 1841 would reduce this to around 90 seconds, making daguerreotype portraits possible.

After polishing a silver coated copper plate, it would be sensitized with chemicals in the darkroom. Now ready to capture the image, the plate would be placed inside the camera and then the exposure would be timed. Then, the plate would be returned to the dark room to be developed by the fumes of heated mercury.  Once developed the image would be “fixed”, or made permanent, in a bath of hyposulphate of soda.  The plate would then be dried, covered by a sheet of protective glass, and fitted to a frame or small leatherbound case. 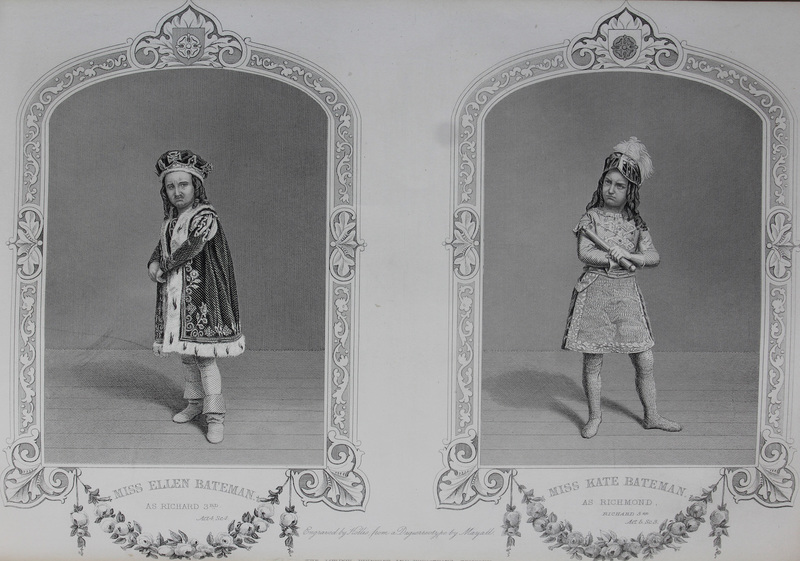 The last child prodigies to gain international renown, Kate and Ellen Bateman were a staple of 19th- century novelty theater. Managed by P.T. Barnum and trained by their parents H.L. and Sidney Bateman (prominent American actors, themselves), the Bateman sisters began their stage careers while still toddlers. Figure 1, an engraving from a daguerreotype, depicts the Batemans in their most celebrated roles, Richard and Richmond from Richard III.

Serious Shakespearean roles such as Macbeth, Shylock, and Richard III were necessary, vital even, for the distinction of 19th-century child prodigies. Richard III was a particularly popular part of the child prodigy repertoire in the mid 1800s after being first attempted by Master William Betty.  The Bateman’s most often performed the fifth act of Richard III with Miss Ellen as Richard III and Miss Kate as Richmond.  In their first star engagement in the roles at the Boston Museum in 1849 Kate and Ellen Bateman were just six and four years old, respectively.

← Actors in the Role
Advertising Performances →
The Batemans