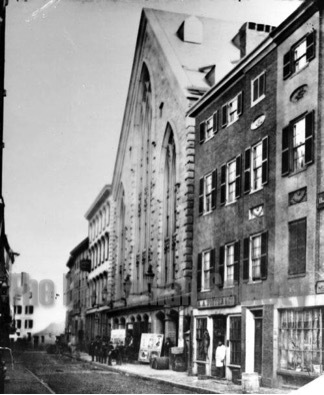 Nineteenth-century printed posters advertising performances of Shakespeare’s plays are another example of interaction between theatrical and print culture. Two facsimile examples from Drew’s collection on view in this exhibition show both the format of these cheaply produced and disposable posters and popular American performers who were known for playing Richard III, Edwin Booth and Edwin Forrest. Posters were put on display outside theatres, as shown in Figure 1. 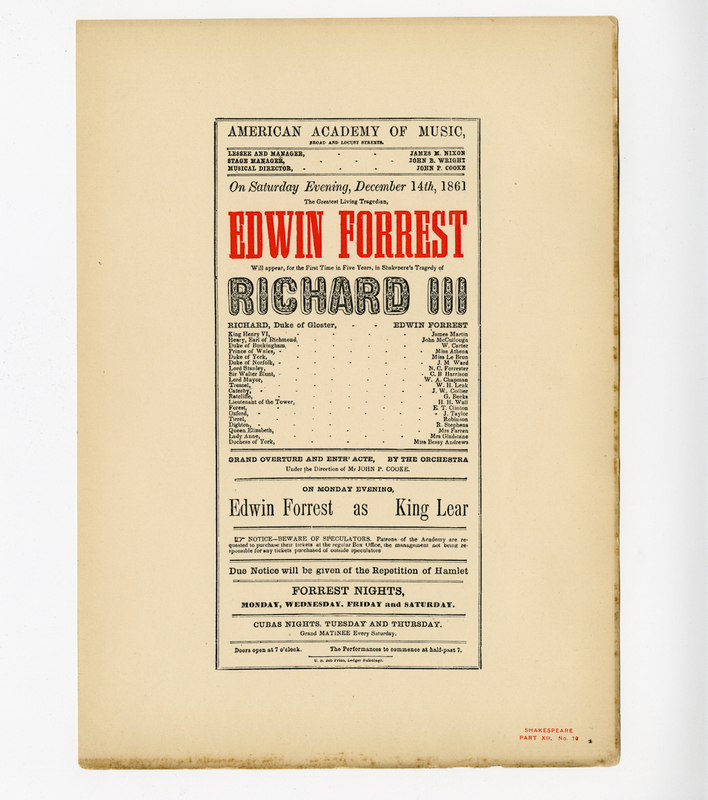 Prior to the 1820s prominent native born American actors, particularly Shakespeareans, were virtually unheard of.  The first American to become renowned on the Shakespearean stage was Edwin Forrest (1806-1872). Forrest learned his craft from small playhouses as he toured across the country.  By 1821 he was playing Richmond opposite Edmund Kean’s Richard III in Albany, New York.

Forrest was known for his physical and emotional power and he dominated the American stage for thirty years.  Although technically excellent, Forrest’s force many times seemed too much even for Shakespeare's villains, overdoing aspects of their character and stripping from lines everything but their dictionary meaning.

After an unprecedented four week run of Macbeth at the Broadway Theatre in 1853, Forrest stepped down from the stage and retired for several years.  The print below advertises one of Forrest’s comeback performances in 1861 at the American Academy of Music in Philadelphia.  Even after more than five years off the stage Forrest is advertised as “The Greatest Living Tragedian”.

Forrest was one of the first Americans to own a copy of Shakespeare’s First Folio of plays, a version of which is now on display in Mead Hall on the Drew campus. Forrest’s copy of the book burned in a house fire in 1872 and its remnants are in the collection of the University of Pennsylvania. 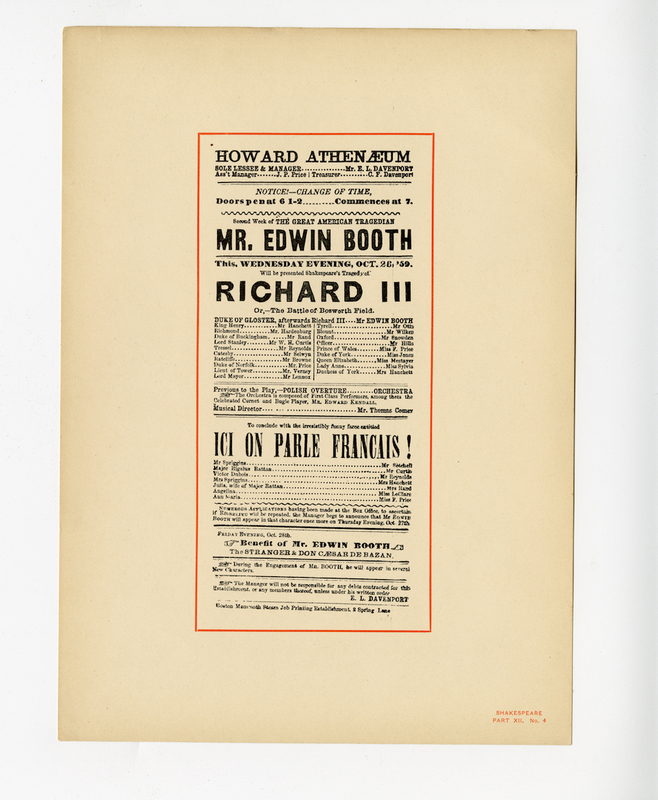 Born into a family of prominent actors and named after Edwin Forrest, it is no surprise that Edwin Booth (1833-1893) took the American Shakespearean stage by storm at the young age of 18. Booth’s career started in the spring of 1851 when Junius Brutus Booth decided that he simply didn’t feel like acting the part of Richard III during his run in the play at the National Theater in New York.  When Booth asked his father what would happen he replied, “Go act it yourself”.  And so, swimming in the cloaks tailored for his father, Edwin Booth made his debut in the role of Richard III.

This debut at 18 was the beginning of a long career which culminated in his becoming the leading American tragedian of the nineteenth century.  With fine technique, a musical voice, and expressive eyes, Booth was celebrated at his 1857 premiere of Richard III at the Metropolitan Opera as “Hope of the Living Drama”.  Booth had runs at most of America’s important theaters from Boston’s Howard Athenaeum to Philadelphia’s Walnut Street Theater and even the Winter Garden in New York City, which Booth himself managed.

Perhaps Booth’s most important contribution to the Shakespearean stage, particularly to Richard III, was his entire reworking of the play, particularly the character of Richard III, for his 1878 New York production of the tragedy.  Dissatisfied with the Cibber’s version of Richard III that had been put on for many years, Booth strove to bring Shakespeare’s Richard III back to the realms of humanity by portraying him as complex and intellectual being rather than a raging ruffian.

Although often overshadowed by the part his brother, John Wilkes Booth, played in American history, Edwin Booth’s contributions to the American stage certainly earn him the title of “The Great American Tragedian” as he is referred to in this advertisement.