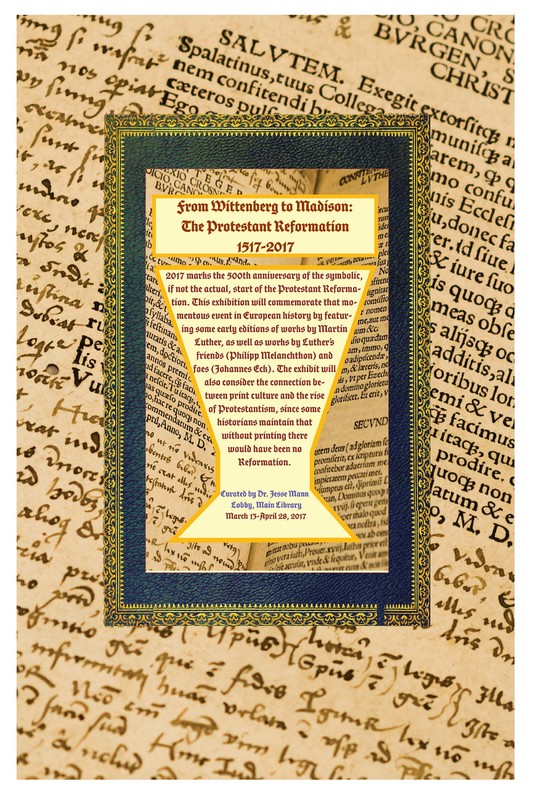 From Wittenberg to Madison:
The Protestant Reformation, 1517–2017

This year 2017 marks the 500th anniversary of the symbolic start of the Protestant Reformation. When, in 1517, Martin Luther affixed his 95 Theses to the door of the Schlosskirche in Wittenberg his was not a revolutionary act. Calls for reform of the church were not new in the 16th century, and many contemporaries, notably Humanists such as Erasmus, shared Luther’s critique of the Indulgence system and other ecclesiastical abuses. Like Humanists, Luther and subsequent Reformers sought a return to “the sources” (ad fontes), to early church models, to the Biblical languages (as well as the vernacular), and to the Bible itself. However, Protestant theology, if one can speak in such general terms, differed from previous calls for reform. Luther and other early Protestants not only criticized church abuses; but also, more fundamentally, they challenged doctrines. In contrast to their Roman Catholic adversaries, they emphasized the sole authority of Scripture (sola scriptura). And their understanding of justification by faith (sola fide) directly challenged the Catholic sacramental and sacerdotal systems.

A movement as momentous as the Protestant Reformation was clearly not started by a single person or by a single act. Other complex factors – social, political, economic and even technological – contributed to the rise and successful dissemination of the Reformation movement. One such factor was the development of printing with moveable type in the mid-15th century, and scholars have long noted and debated the connection between the Reformation and print culture.

This exhibit celebrates both the “birth” of Protestantism and the role that printing played in its genesis and growth. Just as Reformers focused on the Word, this exhibit focuses on the word, on texts and on the impact of literacy. Displayed here are examples of the Humanist and Protestant concern with language (Erasmus, Melanchthon, and Beza), of Protestant pamphlet literature (Luther), of Protestant developments beyond Luther himself (Calvin, the Book of Common Prayer, Quakers, and Wesley), of Catholic opposition to the Reformation (Eck, Index of Prohibited Books), and of Protestant historiography (Flaccius). With apologies to Luther and other Reformers, we encourage you to indulge yourself in these remarkable materials from Drew’s Special Collections.

From Beza to Eck →
Introduction